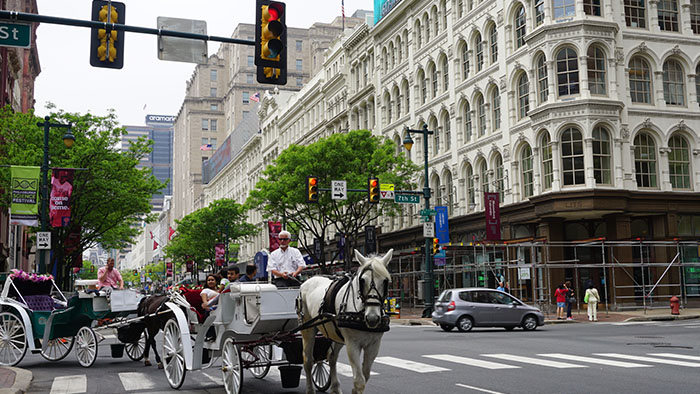 A visit to Philadelphia is sure to be steeped in American history and culture. It doesn’t get more American than the Liberty Bell and Independence Hall, where the Founding Fathers signed the Declaration of Independence in 1776. And it doesn’t get more authentically Philly than cheese steaks at competing Geno’s Steaks and Pat’s King Of Steaks, and the oldest farmers market in the country, Reading Terminal Market. But, when you’ve been there, done that, what else can you explore?
**media[933160]**
Philadelphia neighbourhoods beckon the savvy traveller who can, by slowing down, get a glimpse of what it’s like to live here, to exhale and experience the heart and soul of a great American city. One neighbourhood that’s not on the radar of many travellers, but should be, is West Philadelphia, or West Philly as it is commonly known, with University City as its bustling heartbeat. Aptly named — the University of Pennsylvania and Drexel University are located here — the area buzzes with youthful exuberance. The diverse, worldwide student population brings the magic of different languages, dialects and customs to the area.
Strolling along the bustling sidewalks, visitors will find a foodie’s dream with a vibrant street-food scene, high-end, locally owned restaurants and everything in between. Historic sites and museums are everywhere, with some pop culture icons as well, and the parks add a touch of green to the cobblestone and brick.
**media[933161]**
Here are some gems of West Philly not to be missed:
• The Penn Museum will take you back to ancient times in faraway places and other lands. You’ll find jewellery from Ethiopia, Mayan sculptures, an Egyptian tomb, the Granite Sphinx of Ramses and new Middle East galleries. After you’ve seen the amazing American History of Philadelphia, the Penn Museum gives you the world.
• World Cafe Live is a multi-level venue devoted to music and good food. Take a seat upstairs at the chic Upstairs Live Cafe, where you can get late-night food and drinks along with an eclectic array of live music (they don’t call it World Cafe Live for nothing!). Downstairs Live is a larger concert venue, hosting US’ known artists. It’s also the home of WXPN radio, which broadcasts a show of the same name.
• The Study at University City is a local gem for guests who believe the right hotel can enhance and elevate an already wonderful trip into the stratosphere. This is not a cookie-cutter chain, but a boutique that features local artwork in an onsite gallery; hand-blown glass light fixtures (locally made); display cases with artefacts of the city’s past; and its lobby, dubbed the Living Room, a vibrant and dynamic core of the hotel, a gathering place for guests to feel at home.
**media[933162]**
• Schuylkill River Trail meanders along some 30 miles of the Schuylkill river, and is a favourite of bicyclists, walkers, runners and families. Enjoy the green space along the riverfront, or use it as your way to and from the Philadelphia Museum of Art and other area attractions. If you really want to get your exercise and American history on, you can pick up the trail in West Philly and take it all the way to Valley Forge National Historical Park.
• The multitude of cuisines in the West Philly neighbourhood is reflective of the diversity of the student population. A true foodie destination that’s a bit off the beaten path, you’ll find African, Middle Eastern, Mediterranean and Indian spots with daring fusions of flavours; upscale, chef-driven restaurants; and down-home Philly goodness. Highly recommended from the city’s foodie community: Marigold Kitchen (its venison gets rave reviews), Aksum, which blends Mediterranean and North African cuisine; and Dock Street Brewing (Philly’s first microbrewery) for all-American lounge food and burgers.