On the Ball (Part 4): From Oman to Europe, chasing the dream of pro football 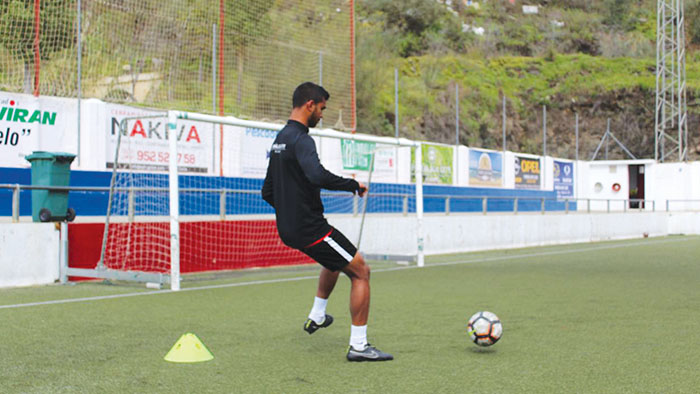 Fresh from his latest season playing in Spain, Muscat’s very own Indian footballer was back in town on a well-deserved holiday.
Saurav Gopalakrishnan, who now plays professional football in Europe, spoke to Times of Oman about the pitfalls he has faced as a footballer and, more importantly, the lessons he learned from them.
“I have had my fair share of injuries, but my first step has always been to accept it,” he said. “Football is, after all, a contact sport, and the second aspect of it is to enjoy the experience. It is going to be tough at times, but if you go through it with a smile on your face, then you will be better for it. I have had a shoulder dislocation multiple times, hamstring pulls, knocks here and there, cuts and bruises. You get everything.”
Saurav currently plays for CD Almunecar in Spain, a club that partnered with the Malaga City Football Academy to provide young, talented players a chance to play their first team football.
“But at the end of the day, that sensation of taking to the field is like no other, and that is what is most important for me,” said the former Indian School Muscat alumnus. “The most serious injury I had suffered was my shoulder injury, where I first had a dislocation and then it recurred. Fortunately, I had my family to support me and an excellent medical team that helped me along the way, and I learned my lessons from that.
“The greatest of these lessons would be to go about your life with a smile on your face, because you only have one life to live, and you might as well own that life,” he added. “That shoulder injury was the result of an apparently harmless looking tackle, but I just heard something pop and go out of place. Thankfully, everything went back into place, but there have been about seven or eight times in which it recurred.”
Saurav’s attitude has always been to look at the positives of any situation, and he strove to find the silver lining in his injury, as well.
“That allowed me to take a step back, because when you are playing football, you are so focussed that you actually tell yourself that you need to go on and on and on, and that you need to be relentless, almost at the cost of your own health,” he said. “To other people, I would say that you need to take care of yourself first, because your body is your vehicle, and you need to do whatever it is to be in the correct health, no matter what it is that you do.”
In this exclusive interview with Times of Oman and TFM, Saurav and his mum, Seeta, also spoke about the obsession with nutrition young footballers may have.
“About his nutrition, I was always very clued into these things,” said his mum. “I believe in good nutrition, and my family is quite aware of these things and good at following them, so that was always taken care of. We just had to up his protein intake when he seriously wanted to follow the sport.”
Saurav was only too happy to share how he had become a little too carried away with being obsessive about what he ate, and more importantly, when he ate it.
“There was a time when I was obsessive about my nutrition, to a point where it actually used to affect my parents. But being the age I was at the time, I didn’t realise it back then. Along the way, those are also some of the things you learn, and you learn to accommodate that,” he added.
“In my mind, everything had to happen on the dot, so I would just abandon spending time with my family or going on a day out, and on a rare occasion that I did agree to go out, I would remind my mum and dad that I had to not forget to eat this and that at a particular time,” recalled Saurav. “I would take my own lunches in my own Tupperware boxes and, at a point, it became an obsession and even a craze, maybe.”
To be continued in Part Five.