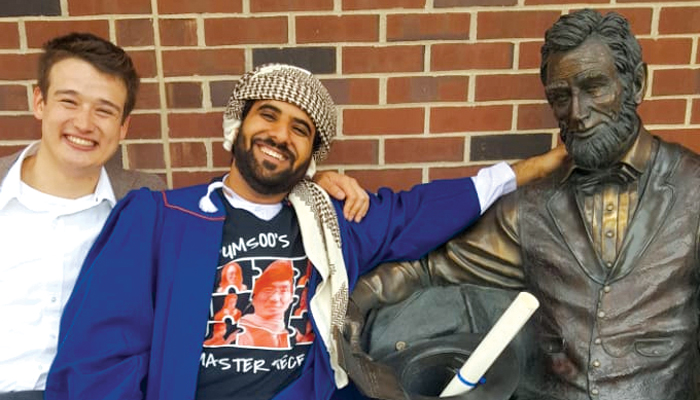 Mahmood Al Wahaibi, 29, is all set to be the lone representative of Oman at the Middle East Rail 2019 meet, to be held in Dubai on February 26 and 27. It is an international conference that aims to get experts to discuss railways and the idea of regional connectivity and is being called “the regional rail show for innovation, technology and strategy”.
Al Wahaibi will be visiting and speaking in an official capacity as the regional planner and logistics analyst at the Supreme Council of Planning (SCP), a government body.
He spent some nine years studying urban planning, eight of them in the United States and another year in South Korea. He is a Master of Urban and Regional Planning (MUP), University of Illinois at Urbana-Champaign. As undergraduate degrees, he has double majors in Urban Studies and Geography. He is also a bachelor of arts with double majors in urban studies and geography (equals double bachelors and double minors in Geographic Information System and Criminology (equals double higher diplomas), besides a specialised certificate in international relations and economic development from the Yonsei University in Seoul, South Korea.
The 29-year-old has also done various research works in his field and attributed much of his success to his professors.
“I was fortunate enough to be surrounded by the right people who always encouraged me to do more. For instance, Paula Pentel during my undergrad course encouraged me to research the possible impact of a sea level rise on Muscat and what could be the possible implications and mitigations,” said Al Wahaibi.
“I also did work on bike lane study in Minneapolis city where our study was adopted by the City Council. Our research was on studying the impact of having mix-lanes for bikers and public buses and we proved that it actually poses a danger to bikers who might be hit by buses or even cars,” he added.
“Moreover, I wrote an article about Gulf Women and Oil Wealth, which looks at the historical empowerment of women in the Gulf. In this piece, I discussed the future of women empowerment in the Gulf, particularly in Oman, where I see education as the way for women to speak for themselves,” he said.

Certified planner
But his accomplishments don’t stop there. He is also a certified urban planner.
“I am permanent member of the APA (American Planning Association), which makes me a certified urban planner. I have recently earned my Leadership in Energy and Environmental Design (LEED) Green Associate certificate to make me one of the few Omanis to be accredited by the US Green Building Council (USGBC),” he said.
“I was also the first Omani to be awarded the Illinois’s Leadership Certificate by the Illinois Leadership centre sponsored by Rolls Royce and the University of Illinois as the host institution. I was also chosen to receive the Karl Blohmans Award for Departmental Excellence. This award is meant to recognise my outstanding scholarly performance and exceptional professional practice,” he added.
**media[933152]**
Contrasting London and Muscat
Al Wahaibi added that his research work continued at the University of Illinois.
“At the University of Illinois, I researched the historical similarities between Muscat and London as the imperial capitals of two large empires (Omani Empire and British Empire). Furthermore, I reviewed Oman’s diversification plans and the current planning structure of the country in my article The Journey of Economic Diversification.
“Then, with the help of Professor Bumsoo Lee, who is a prominent transportation and land use specialist, I wrote Oman Railway: Logistics Connectivity, Environmental Protection, and Traffic Safety in cooperation with Oman Railway Company and Oman Logistics Hubs and political uncertainty in the Gulf,” he remarked. The urban planning expert said that his research on economic diversification in Oman had been very interesting.
“It talks about the logistics potential of the country to develop the non-oil sector of the country, looking at non-oil exports and projecting the possible growth areas with 35 trading partners internationally. The research looks at possible political scenarios that may impact the growth trajectory up to 2022. Currently, this piece is under the review of the Contemporary Review of the Middle East which is a peer-reviewed academic journal, part of SAGE journals, which is the largest academic publisher in the world,” he added.
Al Wahaibi is looking to work with Sultan Qaboos University (SQU), but added that he couldn’t disclose the details as it was still work in progress.

Interest in field traced to homeland
“The crystallisation of my interest in Urban Planning comes from the current urban issues in Muscat. As a Muscat native who grew up in Ruwi, I came to acknowledge the sprawling nature of the city that makes it harder for people to move without a car,” he said.
“Professor Faranak and Professor Bumsoo Lee helped me a lot with my interest in community development in Oman and transportation issues, particularly the Omani Railway project which I have researched extensively,” Al Wahaibi said.
“Urban and Regional Planning is an interdisciplinary field that has a unique stand in between different specialised fields, such as architecture, engineering, environmental science, construction, economics, finance, design, politics, social sciences and even arts. The flexible nature of this field gives the pursuer the freedom to combine his/her passion in the field,” he added.

What makes a well-planned city?
“This is a very tricky question, there is no such thing as a ‘well planned city’ in reality. Yes, you might see claims of ‘best 10 well-planned cities in the world’ as huge headlines in a newspaper or any form of the media. The reality is that the urban environment is an ever-evolving creation that directly responds to ever changing human needs. In other words, a well-planned city 20 years ago won’t be a well-planned city now because it doesn’t have the amenities and the infrastructure to support the current lifestyle of people,” he remarked.

The perfect planned city
Al Wahaibi said that he would warn people against the notion of a perfectly planned city.
“There is no utopia in urban planning. All cities around the world have their own strengths and weaknesses. Some cities are better than others in implementing certain elements of urban planning such as public transportation, community engagement, economic development and so on.” “Therefore, I could name some cities that have done a great job in some aspects. For example, Seoul city in South Korea has one of the most extensive public transport systems, with a well-maintained subway system,” he said.
“Muscat has done a great job in maintaining its traditional look and has done a great job in preserving the history of the city. The twin cities of Minneapolis - St Paul are one of the most successful examples in the US of taking planning to a regional scale where both cities coordinate their plans and project their influence beyond the cities’ borders,” Al Wahaibi said.