Two eateries in Muscat fined over food quality after inspections 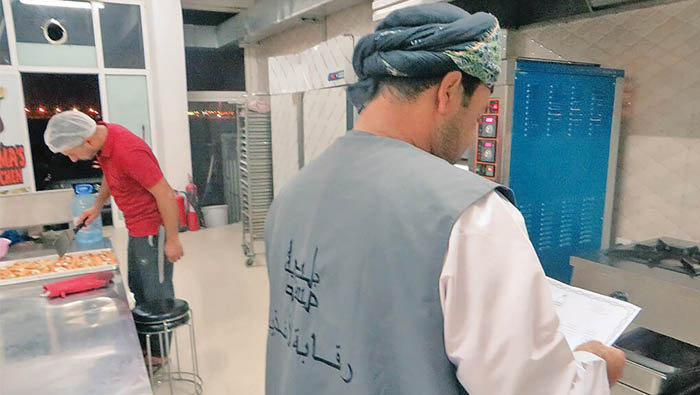 Muscat: As part of its constant efforts to ensure public health and consumer safety, authorities of the Muscat Municipality handed out two fines in the course of their inspections of eateries that supply meals to school cafeterias.
The Food Inspection Department searched as many as 13 such establishments and cited the protection of health of students as a reason for the exercise.
“The Food Inspection Department at the Directorate General of Muscat Municipality in Seeb carried out an inspection of 13 restaurants and cafes that supply meals to school cafeterias. This was done in order to monitor the preparation and transportation of food and to protect the health and safety of students. The inspection resulted in two fines for non-compliance with health requirements,” the officials stated.
It was a busy day for Muscat Municipality authorities as they also raided business establishments that were being run illegally or didn’t have the necessary licences. Two houses in Muttrah Al Kubra were raided in such a case.
According to officials, the two houses were being used to run illegal businesses in violation of the local laws. While one of the houses was being used as a tailoring shop, the other was being used to “prepare and store food”, officials said.
According to the Municipality’s online statement, “Muscat Municipality carried out a raid on two houses in Muttrah Al Kubra, where they [found that one of the houses] was being used for sewing and another was used to prepare and store food in unsuitable conditions, which is contrary to the local laws and orders.”
Authorities associated with Muscat Municipality also fined and shut down companies in Boushar for operating without a licence.
The information was disclosed on Muscat Municipality’s official Twitter handle. The raids were carried out by the civic body’s Urban Inspection Department and took place in Al Masfah area.
“The Urban Inspection Department of #Muscat_Municipality in Bousher seized and fined companies in Al Masfah area for carrying out unlicenced activities, which violate the laws and regulations governing local markets,” Muscat Municipality tweeted.