More days of flooding ahead for Carolinas, surrounding states 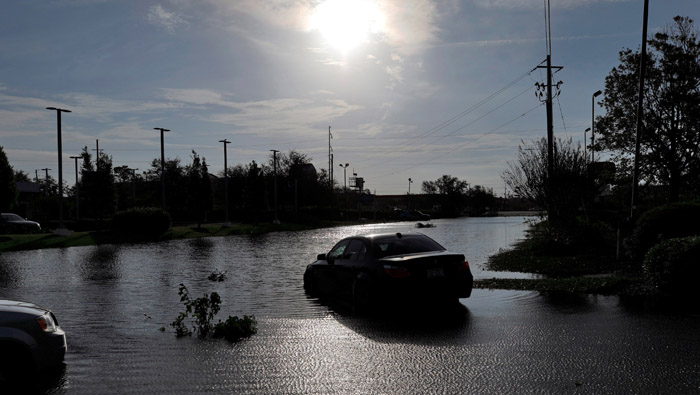 Wilmington(North Carolina): The remnants of deadly Hurricane Florence brought more misery to the waterlogged Carolinas on Monday with officials warning the worst is yet to come, as heavy rain persisted and swollen rivers posed a growing threat.
Florence was a tropical depression on Monday with maximum sustained winds of 30 mph (45 kph) as it headed through Virginia and toward New England.
With the rain and winds headed north, some residents in North and South Carolina started to return to their homes as the sun peeked through the clouds briefly for the first time in days.
Tens of thousands of houses have been damaged, but for many parts of the Carolinas, "the worst is yet to come" as river levels rise to historic levels, said Zach Taylor, a meteorologist with the US National Weather Service.
"The soil is soaked and can't absorb any more rain so that water has to go somewhere, unfortunately," he said, adding that the rivers would start to crest on Monday.
Flash floods, landslide warnings and "prolonged significant river flooding" throughout the region will continue for the next few days, the National Weather Service (NWS) said. Flash flood watches extended all the way to Pennsylvania, Maryland, New York and southern New England. The coastal city of Wilmington, North Carolina, remained cut off by flood waters early on Monday.
At least 17 deaths were reported in North and South Carolina. Rescue teams searched overnight for a 1-year-old boy swept away outside Charlotte, North Carolina, after rushing water pushed his mother's car off the road, the Union County Sheriff's Office said on Facebook.
The mother had driven around barricades on a closed stretch of road, the post said. Florence, which came ashore as a hurricane on Thursday, is expected to weaken again on Monday before re-intensifying on Tuesday and Wednesday, the US National Hurricane Centresaid. It has dumped up to 40 inches (100 cm) of rain on North Carolina since Thursday, the NWS said.
Some Carolinians were relieved that the storm was pushing out, despite the continued threat of flooding from rivers.
We've observed a one-minute period of sunshine at the NWS Raleigh office," the NWS said on Twitter. "Last time we had sun was on Wednesday."
In many areas, the brief period of sun was wiped out by more rain but some evacuated residents were able to return to their homes to assess damage. Eric Tryggeseth, 59, found his home in Leland, North Carolina, without power on Monday and a tree laying in his front yard. He had been evacuated a day before by military troops in a truck. "The floodwaters were rising so I figured I better get out of there,” he said. "I can’t thank the first responders enough.”
New Bern, North Carolina, a town of 30,000 located at the confluence of the Trent and Neuse rivers, was one of the hardest-hit spots when Florence first came ashore and City Manager Mark Stephens said it was one of the worst storms in its 308-year history.
About 509,000 homes and businesses were without electricity on Monday in North and South Carolina and surrounding states. About 1.8 million customers were affected by the storm.