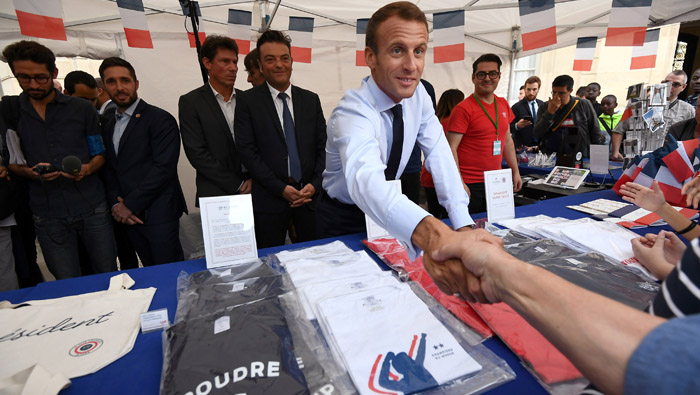 Paris: With his popularity ratings in freefall, French President Emmanuel Macron is counting on a rebound in family purchasing power to keep voters from turning against his reforms.
Macron's government has lined up several tax cuts taking effect in the coming months that should boost the closely tracked measure of disposable income in France. It could hardly come at a better time for Macron, with many voters saying the former investment banker has spent his first year in office cutting taxes for the wealthy and big companies.
More purchasing power was the single biggest priority in voters' eyes, well ahead of cutting unemployment or the tax burden, according to a Kantar Sofres poll released on Sunday.
Squeezed by tax hikes on petrol and tobacco as well as oil price-driven inflation, household spending has floundered this year whereas it is traditionally the single biggest source of growth, accounting for 52 per cent of economic output.
But next month workers will see a cut in payroll tax they pay to fund jobless insurance and the health system, followed by a cut in a city tax for all but the wealthiest in November.
"We are gradually going to improve French workers' purchasing power," Finance Minister Bruno Le Maire told LCI television on Monday. "We are going to make work pay better. The French are going to see the fruit of these policies in the coming months."
With a solid parliamentary election behind him, Macron faced little resistance in his first year in office to a major overhaul of the labour code and the scrapping of the wealth tax. But it earned him a reputation as a "president of the rich" that has been hard to shake off.
A summer scandal over his bodyguard beating May Day protesters has further dented his image, and a popular environment minister resigned live on radio over frustration that Macron's agenda was not green enough.
With his popularity ratings at all time lows, Macron needs to rebuild political capital before he launches what are set to be contentious reforms to unemployment insurance and the pension system next year, while also trying to cut public spending.
In addition to tax cuts this year, Macron's government has pledged to scrap payroll tax next year on overtime work and profit participation schemes in small firms.
The central bank said in its latest economic outlook on Friday that the stars were aligned for a rebound in purchasing power starting at the end of this year and into 2019.
"We're expecting about 200,000 (job creations) this year, that should translate into purchasing power for the French, especially with inflation due to fall," Bank of France governor Francois Villeroy de Galhau told Europe 1 radio.
The government is counting on the rebound to help the economy grow 1.7 per cent next year. While the central bank is optimistic about the outlook for disposable income, it is only expecting GDP growth of 1.6 per cent.
Meanwhile, despite the planned tax cuts, questions linger over whether households will actually feel any better off. From January, taxes will be automatically deducted from people's monthly pay slip, leaving those who are not already on a monthly plan - about 40 per cent of taxpayers - with smaller net take-home pay.
Meanwhile, since the government's measures to boost purchasing power mainly benefit workers, retirees are likely to be left out. Additionally, while the government has said it will raise the state pension next year it will do so by less than the rate of inflation so as to save money.