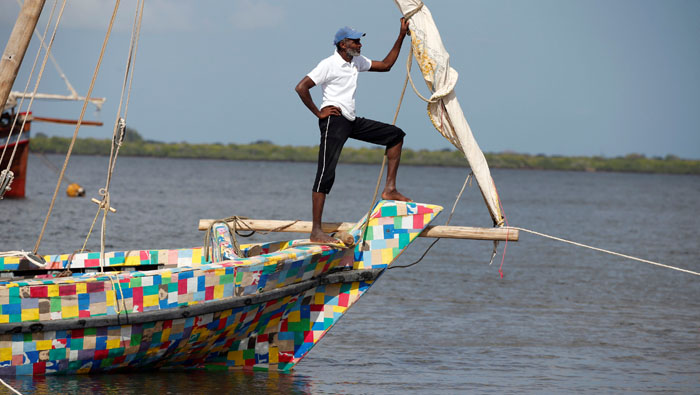 Lamu( Kenya): Kenyan islanders have built a boat made entirely of recycled plastic collected during clean-ups of the ocean to highlight the growing menace of plastic waste that ends up in the sea.
Last year, the Kenyan government imposed the world's toughest law against plastic bags, with offenders - including producers, retailers, and ordinary Kenyans - risking imprisonment for up to four years or fines of $40,000, in a bid to reduce plastic pollution.
Many bags drift into the ocean, strangling turtles, suffocating seabirds and filling the stomachs of dolphins and whales. The construction of the boat has been dubbed the FlipFlopi project because of the hundreds of recycled plastic sandals that cover the vessel.
The nine-metre sailing dhow, which the team built from over 10 tonnes of plastic waste, sailed for the first time in the waters off Kenya's Lamu island on Saturday. Its launch coincided with international World Cleanup Day, during which environmental groups carry out activities to tackle pollution.
The boat is a riot of colour, including red, green, blue and yellow, due to the re-purposed flip flops used to cover the hull and other parts.
"We hope people around the globe are inspired by our beautiful multicoloured boat and find their own ways to re-purpose already-used plastics," said Ben Morrison, the founder of the FlipFlopi project.
Morrison, who spent a decade building a travel business focused on Africa, turned to constructing colourful boats in 2016, when he noticed alarming pollution along the Kenyan coast. The team used Kenyan facilities and technologies to recycle the plastic waste, and was led by local boat builder Ali Abdalla Skanda.
"We are proud to be a guide to the world and its inhabitants during this vital time of challenge for our ocean environment," Skanda said, adding they had received support from around the world as they built the boat.
Najib Balala, the Kenyan tourism minister, praised the team when he attended the launch at Lamu island, a protected world heritage site popular with local and foreign holidaymakers, on Kenya's far north coastline.
Tourism is one of the top hard currency earners for Kenya and officials in Nairobi are keen to protect beach resorts along the coastline.