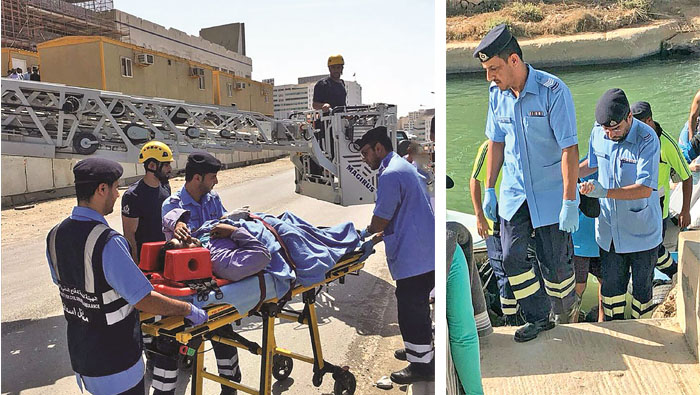 Muscat: Over the past weekend, our heroes at the Public Authority for Civil Defence and Ambulance (PACDA) carried out three rescue operations, saving the lives of three expatriates.
On Thursday, PACDA released details of the rescue of an expat woman who fell into a wadi.
In a statement, PACDA said, “A team from PACDA in southern Sharqiyah rescued an Asian woman, who fell into wadi Shab.” No information was available as how the woman fell into the wadi.
On the same day, PACDA performed another rescue mission, saving the life of an expat who was trapped inside a construction crane. The incident took place in Ghala Industrial Area, where authorities had to use “a hydroelectric staircase to rescue him”.
“Emergency medical care was provided to the injured on site, and he was then transported to a hospital with moderate injuries,” PACDA said.
In the third incident, an Arab national was rescued from a mountain in Musandam.
According to authorities, the man was rock climbing on one of the mountains in Khasab. PACDA said, “The rescue team in Musandam rescued a Gulf national who was stranded on one of the mountains in Khasab.”