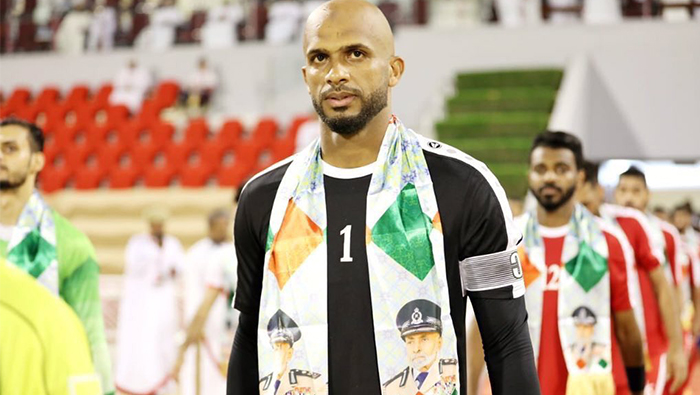 Muscat: Oman’s veteran goalkeeper and national team captain Ali Al Habsi will not be part of the Oman squad for the upcoming Asian Cup, the Oman Football Association has announced.
The 36-year-old was expected to lead the reigning Gulf Cup of Nations champions in the United Arab Emirates, but a serious rupture of his left thigh muscle has left him with a very slim chance of being able to compete in the tournament, which begins on 5 January, 2019.
“The technical team of the Oman Football Association has decided to take Ali Al Habsi out of the list of players participating at the 2019 Asian Cup in the United Arab Emirates,” read a statement from the Oman Football Association. “This has come after the medical examination results that were conducted in Abu Dhabi.
“The medical team has announced that Al Habsi has suffered a second-degree rupture of the left thigh muscle, which will require intensive [care] for three weeks, which will make it harder for him to participate in the competition,” they further added. “The Oman Football Association hopes he will have a speedy recovery, and hopes he will return back to the pitch.”
In the wake of Al Habsi’s unavailability, national team coach Pim Verbeek has decided to call up Ammar Al Rashidi to the training camp in Abu Dhabi, where he will join up with the rest of the national team players. Al Habsi has left the camp and is now back in Muscat.
“The period of injury is one of the most difficult psychological periods for a football player, especially when you are [held back] from representing your country due to an injury and when you are eagerly awaited by everyone,” said Al Habsi, who went on to wish his team mates luck for the tournament.
Ali Al Habsi became the first Arab player from the GCC to play in the English Premier League when he signed for Bolton Wanderers in 2006, having moved there from the Norwegian side Lyn Oslo. He then went on to represent Wigan Athletic for five years, where he became the first Omani to win the prestigious FA Cup in 2013, following his side’s defeat of Manchester City in the final.
He then moved to Championship side Reading in 2015, before returning to the Middle East to play for Al Hilal in Saudi Arabia. He has 120 caps for Oman, with whom he won the 2009 Gulf Cup of Nations when it was held in Muscat, with Oman beating Saudi Arabia 6-5 on penalties.