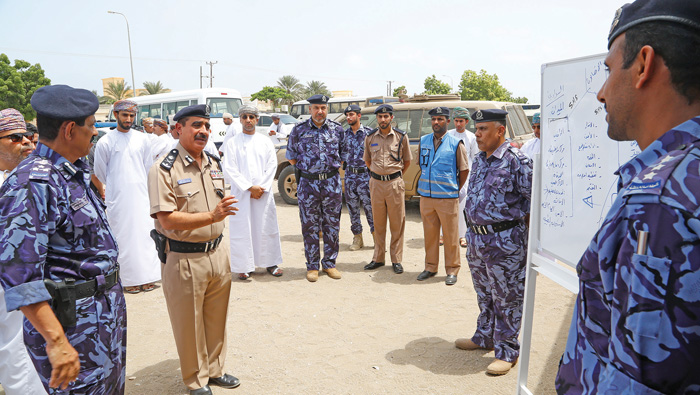 Muscat: The international mock tsunami drill, IOWave18, was conducted at Sawadi Al Sahil yesterday. The exercise, which takes place every two years, was done on a larger scale this year involving more people.
The main purpose of the drill was to raise awareness and ensure preparedness in case of such a calamity.
“It’s an Indian Ocean Wave exercise for 2018. This is the first time that we are conducting it on a large scale in Oman. Two years ago, it was a table-top exercise in one of the schools. It is a gradual preparation for tsunami evacuation requirements,” said Lieutenant Colonel Faisal Al Hajri.
A 9.0 magnitude earthquake was simulated in the Makran subduction zone, which was expected to cause tsunami waves that would hit Oman’s coastal areas. As part of preparing the authorities and the public, the Sawadi area was evacuated.
Early warning
“We are mimicking the concept of reaching the people via early warning systems, mechanisms, public warnings and social media so the community is able to react to such warnings and evacuate to safer areas,” he said.
“We have been working with the local community for the past two months, educating them, making them aware of the type of sirens and warnings they will receive and how they should react towards them,” said Lieutenant Colonel Faisal Al Hajri.
“The concept here is that we enhance resilience by increasing public awareness using self-evacuation. There is no time for the public to wait for the authorities to evacuate them,” he said.
A number of agencies including the National Centre for early warning system, PACA, PACDA, and others participated in the drill.