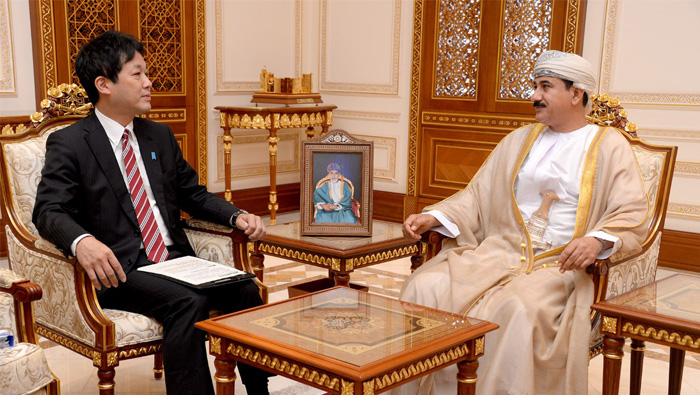 Muscat: Oman and Japan discussed cooperation on a whole range of issues when a number of ministers received on Monday Kentaro Sonoura, Special Adviser to the Japanese Prime Minister and his accompanying delegation.
They welcomed the guest and his accompanying delegation and discussed ways to enhance cooperation between the Sultanate and Japan.
When Gen. Sultan bin Mohammed Al Nu’amani, Minister of the Royal Office received in his office today Kentaro Sonoura, and his accompanying delegation, the two sides exchanged cordial conversations and reviewed the march of the good historic relations binding them in all fields and touched on a range of issues of common concern.
Sayyid Badr bin Saud bin Harib Al Busaidi, Minister Responsible for Defence Affairs received the Japanese guest and in his office at Mu’askar Bait Al Falaj.
The two sides reviewed fields of the existing cooperation between the two friendly countries and discussed several matters of common concern.
The meeting was attended by Rear Admiral Abdullah bin Khamis Al Ra’eesi, Commander of the Royal Navy of Oman (RNO), Ambassador of Japan to the Sultanate and the delegation accompanying the guest.
During a meeting with Dr. Ali bin Mas’oud Al Sunaidy, Minister of Commerce and Industry, the two sides reviewed the trade exchanges between the two countries, Japanese investments in the Sultanate and opportunities for joint cooperation, especially in the field of renewable energy projects and electricity generation projects, food security and long-term financing for infrastructure projects.
The two sides also discussed investment in industrial estates and logistics sector.
The meeting was attended by officials from the Ministry of Commerce and Industry, the Public Establishment for Industrial Estates (PEIE) and the accompanying delegation of the guest.
Ahmed bin Nasser Al Meherzi, Minister of Tourism and the Japanese official reviewed topics of common concern, shared ideas and proposals on aspects of potential cooperation between the two sides in tourism, promoting Sultanate’s tourism in the Japanese market, besides studying the potential of signing a memorandum of understanding (MoU) in the tourism field between the two countries.
The meeting also highlighted Oman Tourism Strategy, tourism investment in the Sultanate, besides touching on the Japanese tourism experience.