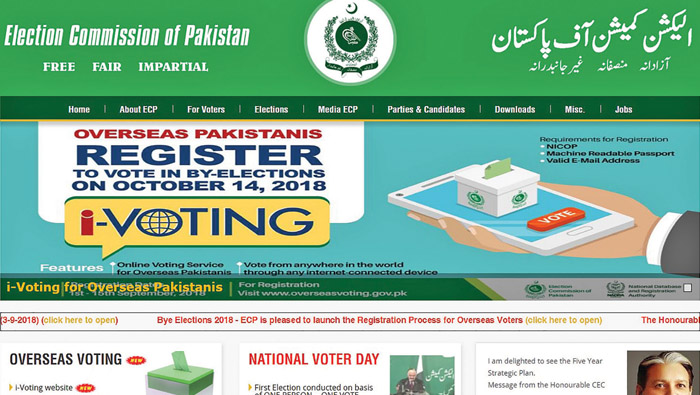 Muscat: For the first time, Pakistani citizens residing in Oman will be able to cast their votes during the upcoming by-polls through the i-voting website recently launched by the Election Commission of Pakistan (ECP).
The website will not only enable Pakistanis living in Oman to cast their votes during the upcoming by-polls, but all the nationals living abroad.
“This step was long awaited not only by the nationals of the country in Oman but all overseas Pakistanis, as I believe it is the basic right of every citizen to cast his/her vote for his/her favourite party or candidate.
“It is a very positive move and we overseas Pakistanis are indeed very happy about it,” said Mohammed Zaeem, General Secretary of Pakistan Social Club Oman.
The ECP will be holding by-elections in 37 constituencies for both the national and the provincial assembly seats on October 14, 2018. Eligible overseas voters can go through the listed constituencies on the homepage of the Overseas Voting System, www.overseasvoting.gov.pk.
To begin with, nationals of Pakistan can register themselves on the ECP’s website in their respective constituencies, as the registration period already started on September 1 and will continue until September 15, 2018.
According to the rules and regulations put up by ECP on their website, only those overseas Pakistanis voters who possess a valid National Identity Card for Overseas Pakistanis (NICOP), valid Machine Readable Passport (MRP), and a valid e-mail address shall be eligible for voting.
“The overseas Pakistani voter, desirous to cast his/her vote through i-voting from abroad, during the registration time period as may be fixed by the Commission, shall access the Overseas Voting System through the internet and create an account using these credentials: name, email address, password of his/her choice, mobile phone number (optional), and his/her country of stay,” ECP stated.
It added that a confirmation email of the created account would be then forwarded by the system to the applicant on his/her given email address and by clicking on the link therein, the voter shall be prompted to provide the number of his/her MRP with its tracking identity and the NICOP number along with the date of its issuance.
“Upon the completion of proceedings under sub-rule (4), a verification process will be initiated wherein random questions regarding a voter’s identity information shall be asked by the system and upon correct reply, a message of ‘Successfully verified’ shall be displayed by the system,” ECP explained.
In case the voter could not correctly reply to the first set of questions after the system allowed multiple attempts, an NICOP number would then be restricted for further attempts, according to rules for overseas voting by ECP.
The ECP added that upon successful verification, a unique “passcode” will be forwarded to the applicant by the system, which he/she would be required to provide on polling day to be able to cast his/her vote.
“On polling day, the voter shall log in to the website using his/her username and password and shall avail of the voting option from the system to cast his/her vote in respect of his/her National Assembly, or, as the case may be, Provincial Assembly Constituency by entering the unique passcode,” according to ECP.
A designated list of candidates of the selected constituency would then be displayed by the system and the voter shall select his/her desired candidate to cast his/her vote. Upon successful submission of the vote, a “confirmation” message would be displayed on the screen.