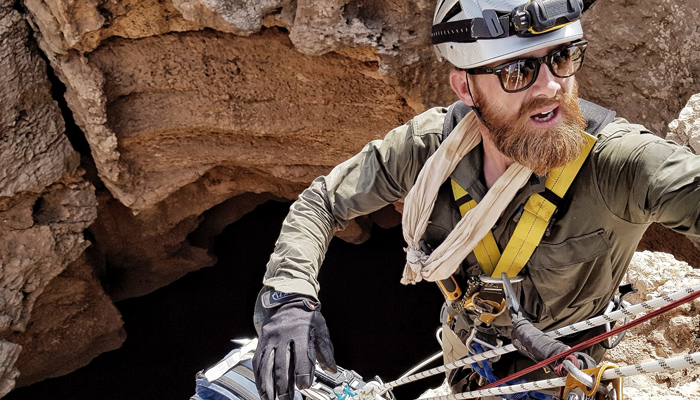 Two of Britain’s most famous wildlife and nature explorers recently visited Oman to film a new series about the country, which will air on British television. Naturalist broadcaster and author Steve Backshall, and Aldo Kane, one of the world’s leading safety experts, came to shoot the new show.
Both Backshall and Kane shared pictures of their time in Oman on social media, and were fascinated by the country. Backshall, in particular, made new friends, including a goat he ran into in the Sultanate’s mountainous region.
**media[924946]**
“Making friends with the locals in Arabia’s Grand Canyon,” Backshall tweeted. He was also impressed by the night skies over Oman, adding: “Desert dreaming. Stars so bright it seems you could pluck them from the sky.”
Filming and exploration for this show had taken the duo across much of Oman’s varied, natural and rugged landscape, from the peaks of the Hajar Mountain range to limestone caves that are occasionally pierced by shafts of sunlight.
**media[924947]**
“Oman’s canyons, begging to be explored!” Backshall had exclaimed. “About to drop into the unknown.” Logistics and safety for the British Broadcasting Corporation shoot was provided by former Royal Marine Commando Kane, whose company Vertical Planet is among the best companies in the world to provide logistical support and safety rigging and supervision for filming in extreme and hostile environments.
**media[924948]**
“We’ve just gotten to Oman now,” he had earlier said. “We are a super-small expedition team now for the Steve Backshall expedition series. We are prepping for some very, very hot canyon action. The camera team is sorting out its kit and the rest of the guys are sorting all the expedition kits and safety kits. We’re going to be doing some big, big drops and I’ve got some stuff that has never been done before.”
“Going down! Next stop, 120 metres, rigging a big hole in the ground,” he had tweeted, before descending into a cave. “This here is canyon country! Scooping the route down for our first big drop.”
The British Embassy in Oman also provided support to Backshall and his team where required.
**media[924949]**
“Lots of interest in Steve Backshall filming in Oman,” said tweets on the embassy’s official Twitter account. “Hope Steve Backshall and Aldo Kane and team are coping okay with the heat out there in the desert.”
“Welcome to Oman, Steve Backshall,” said another set of tweets. “An incredible country to explore. Looks fantastic, Aldo Kane! Welcome to Oman!”
Mohammed Al Rahbi, an Omani researcher specialising in Oman, East Africa and Swahili history, had added: “Looks like Steve Backshall the well-known British explorer, is after something in the canyon country aka Oman. Is it something for a new TV show? Welcome to Oman.”