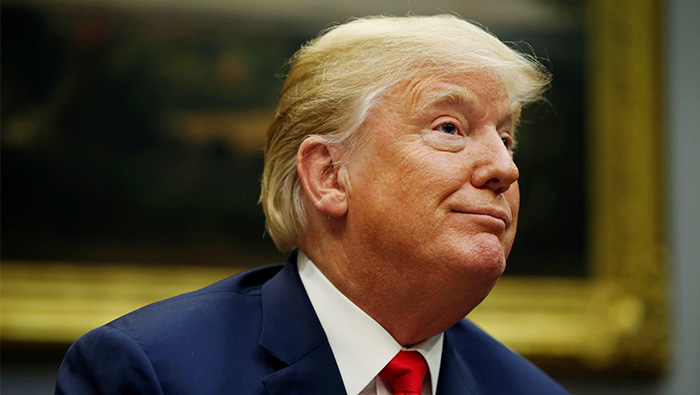 Wahington: Days after cancelling a planned visit to North Korea by his top diplomat citing insufficient progress in denuclearisation talks, U.S. President Donald Trump hailed his personal relationship North Korean leader Kim Jong Un on Wednesday and said there was no reason to resume war games with South Korea.
Trump's statement came a day after his defence secretary hinted that the drills, which North Korea denounces as rehearsals for invasion, could resume.
Trump tweeted a White House statement in which he once again questioned China's role in helping to resolve the crisis over North Korea's development of nuclear weapons that threaten the United States.
The statement said Trump believed North Korea was under "tremendous pressure" from China, but Beijing was also supplying Pyongyang with "considerable aid," including fuel, fertiliser and commodities.
"This is not helpful!" the statement said.
"Nonetheless, the President believes that his relationship with Kim Jong Un is a very good and warm one, and there is no reason at this time to be spending large amounts of money on joint U.S.-South Korea war games," it added.
"Besides, the President can instantly start the joint exercises again with South Korea, and Japan, if he so chooses. If he does, they will be far bigger than ever before."
The statement also said that the U.S. trade dispute with China and other differences "will be resolved in time by President Trump and China's President Xi Jinping. Their relationship and bond remain very strong."
Chinese Foreign Ministry spokeswoman Hua Chunying said the remarks regarding China's role on the North Korea issue were "irresponsible".
"The U.S. side's irresponsible distortion of facts and logic is world-leading and really not something the ordinary person can understand," Hua told a regular news briefing on Thursday in Beijing when asked about Trump's tweet.
Trump caught many American military planners off guard when he announced after an unprecedented summit with Kim on June 12 that the United States was suspending this summer's joint military drills with South Korea.
Concession criticised as premature
The move was broadly criticised as a premature concession to North Korea, which has resisted U.S. efforts to persuade it to give up its nuclear weapons.
On Tuesday, U.S. Defence Secretary Jim Mattis noted that the suspension of joint military drills with South Korea as a good-faith gesture to North Korea was not open-ended.
On Wednesday, he reiterated that no decisions had been made about suspending any future exercises and stressed the importance of the U.S. alliance with South Korea.
The United States and South Korea have internally agreed to carry out the joint military air drill "Vigilant Ace" in December and are discussing the size of the drill and the extent of the participation, South Korean newspaper Joongang Ilbo reported on Thursday, citing multiple unnamed government sources.
In 2017, the week-long "Vigilant Ace" exercise involved a total of 230 U.S. and South Korean aircraft including stealth jets, according to the U.S. Indo-Pacific Command website.
A Pentagon spokesman said, "Routine planning continues for major ROK-US exercises on the Peninsula in accordance with the normal exercise program planning cycle,” without elaborating.
South Korea's defence ministry said that nothing has been decided about whether to hold "Vigilant Ace" this year.
At the June summit, the first meeting between a serving U.S. president and a North Korean leader, Kim agreed in broad terms to work toward denuclearisation of the Korean peninsula. But North Korea has given no indication it is willing to give up its weapons unilaterally as the Trump administration has demanded.
On Friday Trump called off a trip to North Korea by Secretary of State Mike Pompeo just hours after Pompeo had announced it and publicly acknowledged for the first time that his efforts to get Pyongyang to denuclearise had stalled.
North Korea has been seeking relief from tough international sanctions and a formal conclusion to the 1950-1953 Korean War, which ended in an armistice rather than a peace treaty.
But Washington says North Korea must give up its nuclear weapons first.
"We believe that denuclearization has to take place before we get to other parts, and that's been a part of our policy," State Department spokeswoman Heather Nauert reiterated on Wednesday.
U.S. officials say North Korean officials warned in a letter to Pompeo last week that talks with the United States risked falling apart. They now worry that Pyongyang may concentrate on trying to cut a separate deal with South Korea and in doing so driving a wedge between the U.S.-South Korea alliance.
"They basically don’t think we’re doing enough,” a senior U.S. official said on Wednesday, referring to the North Koreans. He said that the tone of the letter was "if you’re not willing to give something, then don’t come.”
U.S. intelligence and defence officials have repeatedly expressed deep doubts about North Korea's willingness to give up its nuclear weapons and had not expected Pompeo's trip to yield positive results.