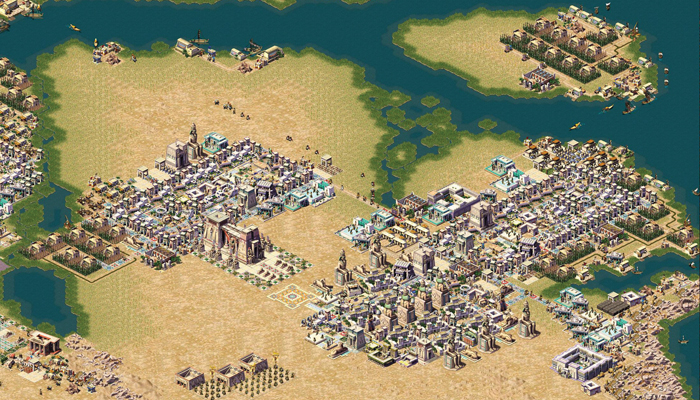 Build a Kingdom, Rule the Nile, Live Forever.
Sounds like a nice dream, doesn’t it? After all, who doesn’t want to be remembered for their deeds through the annals of time? But how will you choose to be remembered? Will you be a benevolent ruler, who diligently looked after the needs of his subjects, the grand architect, whose staggering monuments pointing skyward remain a testament to his time, or the mighty warrior, whose name filled his enemies with fear that made them quake in their boots?
In the world of Pharaoh, you can be remembered for all three of these achievements and many, many more. City-building games may be among the most popular genres today, but this blast from the past (Pharaoh was released in 1999), set in Ancient Egypt, was light-years ahead of its time, providing people with the ability to manage almost everything as they set about building the metropolis of their dreams. An integral part of game developer Sierra’s City Building Series (which includes other titles set in Ancient Greece and China), Pharaoh broke new ground in the city-building genre of video games and remains an extremely popular title nearly two decades later.
Players who turn the clock back and enter the fascinating, stunning world of Ancient Egypt find themselves taking charge of a head of a family whose only claim to fame is that they are a rather prominent household in the village they live in. Pharaoh himself has hand-picked you to settle the rather nomadic village of Nubt. Little do you know, however, that this fledgling community will be your first milestone on the path to glory.
Filling the royal Egyptian coffers comes next, as your family are asked to spearhead efforts in the town of Thinis, which lies in the background of Egypt’s gold mines. As your family’s reputation grows, Pharaoh places you in charge of more and more important projects, some of which involve creating sprawling cities, others centre around guarding Egypt’s borders against her enemies from Canaan, Nubia and Libya, to mention but a few of the adversaries you will meet.
But the most prestigious of assignments involve ensuring the kingdom’s legacy lives on forever: Ancient Egypt was famed for its amazing monuments built to honour the dead, some of which remain standing even today, and draw tourists from all around the world. While the tasks Pharaoh assigns you may start small, keep in mind, that as the architect of his kingdom, there are more honours on the horizon. One of the first projects you will be asked to take on in a simple brick mastaba, a multi-layer burial tomb to honour nobles and their families, before moving on to stone pyramids, sandstone temples, and granite obelisks.
It is these which constitute the most challenging of tasks given to you. These projects involve the transportation of raw materials across Egypt’s stinging desert sands, where they are then lovingly shaped by artisans and masons, who alongside labourers, are the lifeblood of your city, with every new layer of your monument giving you the impetus to carry on further.
But the objectives Pharaoh gives you are not your only responsibility – keep in mind that you are running a city, whose people need access to clean drinking water, fresh food, sanitation, entertainment, and above all, jobs. They are the beating heart of your city, and their needs must be looked after. The better care you provide your people, the more prestige you earn across Egypt.
As your city grows in size and prosperity and begins to teem with life, you will have the opportunity to make it an even more notable one. Sierra introduced trade among other cities in Pharaoh, allowing you the chance to help out those in need, allow your craftsmen to make a name for themselves, and make your city among the finest in the ancient world.
Not a bad way to spend your weekend, is it?
– [email protected]

The Short and Skinny
Name: Pharaoh
Genre: History/City-building
Produced by: Sierra Entertainment
What it’s about: Build a Kingdom, Rule the Nile, Live Forever. The Pharaoh of Ancient Egypt has chosen your family to bring glory to the empire. Will you take this chance to ensure you are remembered throughout history?
Platforms: Windows
Where to buy: GOG Games, Steam, Games Nostalgia, Amazon, eBay
IGN Rating: 9/10