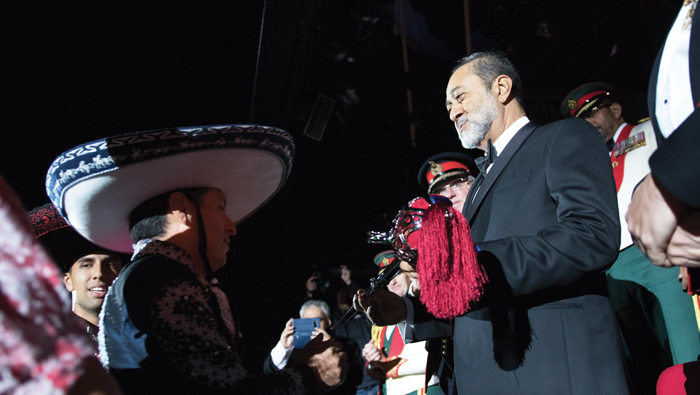 Muscat: The Royal Edinburgh Military Tattoo marked its international ties with the Middle East, as it welcomed Oman’s Minister for Culture and Heritage, His Highness Sayyid Haitham bin Tariq Al Said, to take the official salute on 25, during the final show of this year’s world-famous military spectacle.
The salute taker, Sayyid Haitham, was also invited by the Royal Edinburgh Military Tattoo to present the Pooley Sword, an honour given to the act that has made the greatest contribution to the show as voted by fellow cast members. Banda Monumental De Mexico were the recipients of the Sword this year. Sayyid Haitham made the trip to Scotland’s capital city to take in the sights and sounds of more than 1,200 international performers who have been performing a thrilling display of military pageantry, music, dance, technical wizardry and special effects in front of the iconic Edinburgh Castle since the beginning of August.
A key moment during the 100-minute performance was the stunning display from Sayyid Haitham’s home nation, when 23 horses from the Mounted Pipe and Drums accompanied the inspiring all-female Marching Band, which represents the Royal Cavalry of Oman. The Royal Cavalry of Oman encapsulates Oman’s long history of horsemanship, a central feature in the nation’s identity and culture.
Since 2001, the Cavalry has been open to men and women, with women now involved in all aspects of the military organisation, which is comprised of 1,300 army personnel.
Magical journey
This year, the Tattoo has taken its audiences on a magical journey from the beginning of time, through humankind’s greatest achievements including travel into outer space, as it celebrates “The Sky’s the Limit”.
During the Oman spectacle, spectators are transported to the sweeping expanses of the desert and into the beauty of the Arabian horizon with stunning music and incredible projections beaming onto the façade of the Edinburgh Castle.
The Combined Bands of the Royal Cavalry of the Sultanate have travelled more than 5,000 miles to participate in their first ever Tattoo this year following special permission and the personal intervention of His Majesty Sultan Qaboos bin Said. The appearance comes following years of conversations with the country and the military event.
Brigadier David Allfrey, Chief Executive and Producer of The Royal Edinburgh Military Tattoo, said: “At the core of the Tattoo’s purpose is providing a platform for international acts to unite in one marvellous spectacle. We’re exceptionally thrilled to bring His Highness Sayyid Haitham, a master of international culture, to our performance this evening to give him a sense of the crowd adoration for the beautiful horses and talented Omani performers. We’re also delighted to have him present the Pooley Sword, a ceremonial sword given to one act in recognition of those that have made the greatest contribution to the Tattoo this year.”
“Earlier this year, we announced our ambitious plans to take the Tattoo across the world, including Canada, China and Australia by 2025, and the Middle East is never far from our thoughts. Oman is a diverse nation with a unique talent that we have been very proud to welcome to the show this year,” he added.
The Royal Edinburgh Military Tattoo has welcomed more than 1,200 international performers, with acts from Malawi and Oman to the Czech Republic and the USA, as well as show favourites, the Massed Pipes and Drums and the Tattoo Dance Company, this year. The showcase has celebrated Scotland’s Year of Young People, with almost 300 young people in the cast, as well as marking the RAF centenary year.