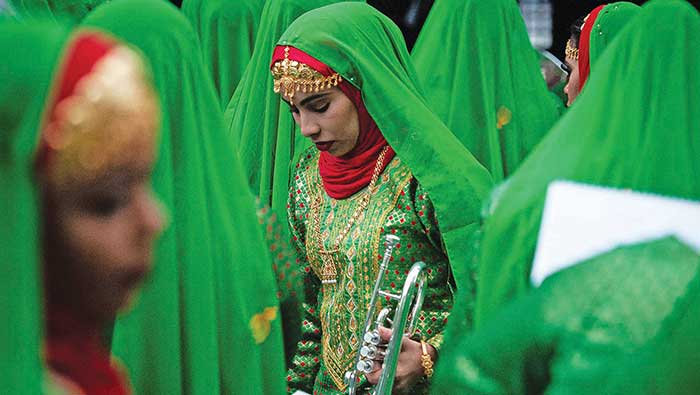 Muscat: This month, 1,200 international performers have come together on the iconic stage of Edinburgh Castle’s Esplanade for the Royal Edinburgh Military Tattoo, wowing audiences totalling over 220,000.
In pictures: Oman's Sayyid Haitham guest of honour at Edinburgh military tattoo
Paralleling the display of harmony and togetherness, the show promotes on-stage every evening a behind the scenes glimpse into the nations, from all points of the compass, which have united to learn about each other’s cultures and traditions, fostering friendships for the future.
The backstage area of the Tattoo is a vibrant blend of cultures, colours and languages, where Omani horse groomers mingle with Czech costume designers and American drill sergeants chat with Mexican mariachi bands, and all of these cohorts go about their roles to the quintessentially Scottish sound of 200 bagpipers tuning up in unison.
The crew of the Tattoo is one of the most diverse and highly skilled in the world—bringing every aspect of the event to life—from music and dance to incredible lightshows, pyrotechnics and the end of show fireworks.
Sneak peek
Brigadier David Allfrey, Chief Executive and Producer of The Royal Edinburgh Military Tattoo, said: “We wanted to give our audience a sneak peek behind the scenes and show the immense effort that goes into staging this show. What goes on backstage is just as mesmerising as what takes place on the Castle Esplanade.
“This year, we are proud to have welcomed the cast and crew from over 10 nations, including some, such as the Czech Republic and Mexico, for the very first time. The Tattoo is all about fostering the spirit of unity and togetherness into making us one of the greatest shows in the world.”
This year, the Royal Edinburgh Military Tattoo has welcomed more than 1,200 international performers, with acts from Malawi and Oman to the Czech Republic and the USA, as well as show favourites, the Massed Pipes and Drums and the Tattoo Dance Company. The 90-minute performance takes audiences on a journey through man’s greatest achievements under the theme “The Sky’s the Limit”, which also celebrates the RAF centenary and Scotland’s Year of Young People.