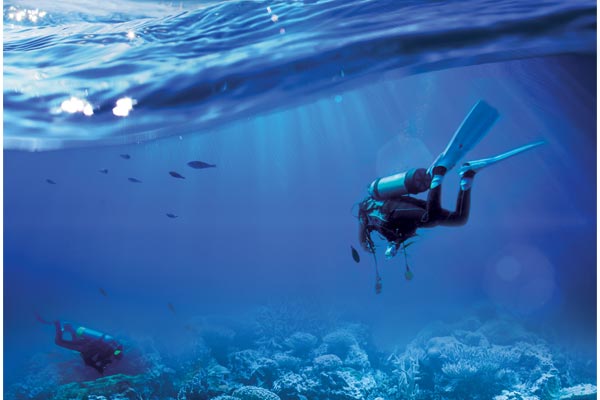 Plunging into the Prussian blue depths of the ocean to swim with the most fascinating marine life makes scuba diving unlike any other aquatic experience. And learning to dive can be a tranquil and deep experience so long you are trained by an expert.

Though it is believed that people have been diving underwater for as long as they have been swimming, even Aristotle is said to have dreamed of being able to breathe underwater. Major developments to this end from the air pump to the breathing belt, were developed throughout the 1700s and 1800. But these were not for leisure use, as even the best of them were unreliable and far from safe. Then, in 1943, French inventors Jacques Cousteau and Emile Gagnan developed the “Aqua-lung” outfitted with a breathing regulator that made breathing underwater safe, a dream come true for ocean lovers. This innovation remains an essential component of all modern scuba dive equipment.

Oman’s warm waters and pristine coastline offer some fantastic diving sites near Muscat, including the Daymaniyat Islands, an Unesco world heritage site. The Oman Sea is plankton-rich, which attracts large schools of fish and pelagic. Farther north on the Strait of Hormuz, Musandam is also a paradise for divers with nutrient-rich waters that support a massive boom of micro planktons, which draw an abundance of marine life.

In the south, the area around Salalah has a beautiful coastline with bays and beaches whose waters are home to kelp forests during the khareef season. They disappear by September making it possible to dive in kelp and on coral reefs at the same sites for diverse experiences throughout the year.

For certified divers, there are plenty of day-boat trips that depart from the marinas in Bandar Al Rowdha, The Wave, and Sifah and a wealth of dive sites to explore.

Creatures: There are a wide variety of soft and hard corals, reef fish and nudibranchs to see. Apart from the diverse reef life, you’ll have the chance to see numerous whale and dolphin species, turtles, rays, and sharks.

Visibility: Visibility averages 15-30 metres/50-100 feet but can be affected by a variety of factors, including the micro plankton rich water. This phenomenon lowers visibility but increases marine life in the area.

Recommended Training
The PADI Drift Diver and PADI Boat Diver courses will help you enjoy diving at the many offshore islands off the coast of Oman. The PADI Cavern Diver course is also a good choice for those hoping to explore sites with caverns, tunnels, and swim-throughs. AWARE – Fish Identification course will help you appreciate the diversity of fish species.

SeaOman Dive Centre
+968 2418 1400; seaoman.com
SeaOman’s dive centres, located at the Millennium Hotel Mussanah and Al Mouj Muscat, are run by a team of highly experienced PADI certified dive professionals offering both instruction and hosted trips. The dive centre at Al Mouj is open for dive trips seven days a week from 8am to 4pm.