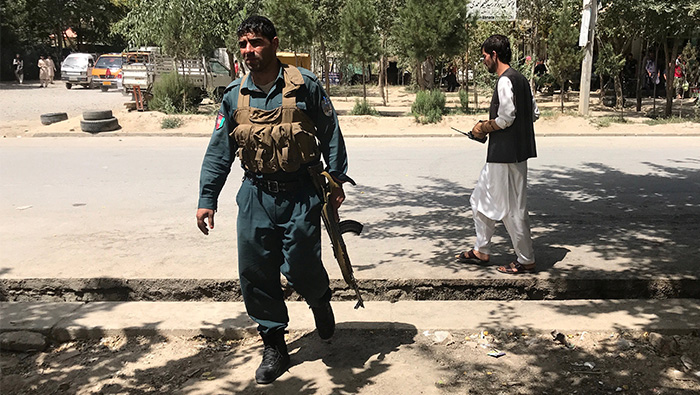 Kabul: A suicide bomb attack on a group of teenagers studying for university exams in Kabul on Wednesday shocked Afghanistan but it was only the latest in a series of attacks on schools which have proved an easy target for militant groups.
More than 1,000 schools across Afghanistan remain closed for security reasons and at least 86 have been destroyed by militant attacks this year alone, according to U.N. figures.
"Attacks on educational institutes by militant groups are one of the most horrific issues facing our nation today," said Interior Minister Wais Ahmad Barmak after Wednesday's attack on the Mawoud Academy, a private study institute in west Kabul.
The blast killed at least 34 people, most of them students attending an English class. No group claimed responsibility although the Taliban denied involvement.
Most of the recent attacks on schools have been outside Kabul in provinces like Nangarhar, a stronghold of militant group IS, whose tactics have become notorious since it first appeared in Afghanistan some four years ago.
Malikyar Hotak high school, in Nangarhar, has been attacked twice in the past few weeks. The first time, a remote-controlled bomb failed to go off, the second time, gunmen beheaded three guards and left the school's main hallway spattered with blood.
"Unfortunately, schools and educational institutions have become an easy target and a means of pressuring the government, for any group," said Kabir Haqmal, a spokesman at the ministry of education in Kabul.
The Taliban, at one time notorious for attacking schools and forcing girls and women to stay at home, now seek to influence schools by negotiation with local education officials and say they do not oppose schooling for girls.
IS, however, has stepped up its attacks on schools.
'No holding back'
Before the attack on the Malikyar school, IS, issued warnings through radio broadcasts and letters to schools that they would carry out attacks in retaliation for pressure their fighters were facing.
"They [IS] were saying, 'if we are not safe in the mountains, if our children are not safe in their houses, then we will not hold back from attacks on children'," said Allah Nazar Amini, the principal of the Malikyar school.
It is a view shared by U.S. commanders in Afghanistan, who said that IS, while based in Nangarhar, had sought to extend its influence in other parts of Afghanistan by hitting soft targets like schools and mosques.
UNICEF executive director Henrietta Fore said in a statement the agency was "gravely concerned" about the growing violence across Afghanistan.
There is serious concern about more violence with the approach of parliamentary elections on October 20, with 1,000 schools set to be used as polling stations, said UNICEF communication officer Alison Parker said.
For children, the risk of violence has become a grim part of getting an education.
"I saw things in our school, you wouldn't expect to see on a battlefield," said 19 year-old Wasiullah, a 12th grade student at Malikyar school.