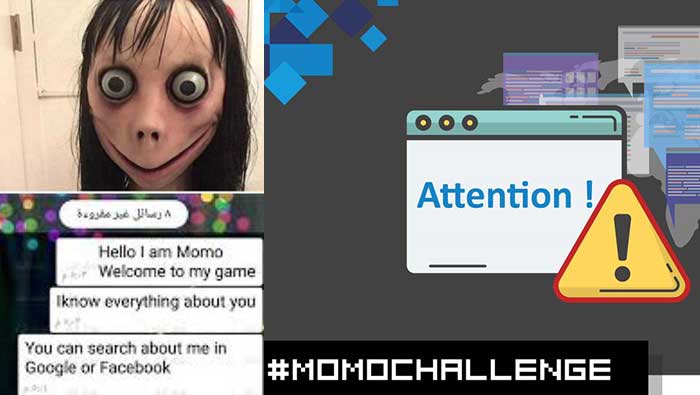 Muscat: Young children and teens are particularly vulnerable to a new viral challenge that is sweeping across social media, child welfare professionals in Oman have warned.
The “Momo Challenge” is a new online game that sees a person named Momo provide people with a list of tasks that seem fairly normal at first, but then escalate quickly so that some may even attempt to commit suicide. Failure to comply with Momo’s orders will lead to the user’s account being hacked, his/her personal details being shared all over the internet, and psychological harassment through a series of disturbing images being sent to the user’s WhatsApp account.
Spreading
The game has been spreading like wildfire across WhatsApp, where users are contacted by Momo, which features an avatar of a face of a hideous looking doll, which has the distorted features of a young girl, characterised with bulging eyes and a creepy looking beak-like mouth, and the body
of a bird.
The game has already resulted in the death of a 12-year-old girl in Buenos Aires, and before it can cause damage in Oman, the country’s Information and Technology Authority has issued a warning asking people to stay away from the game, and refuse requests to establish contact with unknown numbers.
“Some games may carry malicious programmes for the purpose of spying on the owners of devices or for the purpose of extortion or theft of personal or bank information. It some cases, it may lead to physical abuse through the challenges and orders, and ultimately, to the risk of death or suicide, and there lies the seriousness of these challenges or malicious games,” said Haitham bin Hilal Al Hajri, senior training and awareness specialist at the Oman ITA. “We must note and take caution against the infiltration of these games to society.”
“This Momo Challenge of death is not a game that can be downloaded, but it is a challenge in the form of a game that is played over social networks, instant chat platforms or social gaming conversations,” he added.
“This may also be practised through various social networking groups or on the pages of private sites, where victims are misled into believing they were selected for their competence and must prove their worth through the implementation of some orders which are usually carefully selected for programming, where perpetrators draw the victim in and subject him/her to malicious psychological manipulation.”
The Times of Oman spoke to clinical psychotherapist Anuya Phule of the Hatat Polyclinic to find out more.
“The individuals who create these sorts of challenges certainly have a personality disorder,” she said. “Such individuals have a dark streak, are emotionally unstable, self centred and have good manipulation skills. Such individuals grow up in dysfunctional families, are emotionally deprived of genuine love and a healthy connection with parents.”
“They target individuals who are vulnerable, so parents need to be alert, especially if their child is shy or introverted,” added Phule.
“Please be aware about sudden changes in your children’s behaviour, including a lack of social confidence, not having any friends or isolating themselves from you, choosing to be alone and/or indoors, and spending a lot of time on the phone. Such children are more prone to accept these challenges.”
“Teenagers and young children are more prone to these psychopathic people because their minds are still vulnerable and not fully formed,” she explained. “The individuals who create such challenges can be labelled as psychopaths under the DSM—diagnostic statistical manual of mental disorders. They would have also gone through a violent or abusive childhood.”
In response to the ITA’s statement, educators in Oman have also decided to take steps to neutralise the impact of the Momo Challenge.
Jassim Al Balushi, deputy head of training and professional development at the Caledonian College of Engineering, said, “Now that this has come to our attention, we will be liaising with our public relations and media departments to spread awareness over this so that we can stop this from affecting our students. I think all parents must keep an eye on their children, especially if they are young, because today, everyone has access to a smartphone.”
“What is more precious than someone’s life?” he asked. “It is better to educate people now than to treat them once they have been exposed to this challenge, and I think the authorities should start by educating children in schools and nurseries so that they know the dangers of such online challenges.” P Prabhakaran, the Principal of Indian School Al Mabella, said he had already made plans to inform parents and students about the Momo Challenge through the school WhatsApp groups.
“This morning, after we heard about this, we already took steps to send warning messages to our parents and children through our communication channels,” he said. “This is very dangerous, so we must be prepared, and I have also asked the Board of Directors of Indian Schools in Oman if they can alert all the schools to this danger. We will also be making some posters about this to alert children while they are in the school. As the Eid holidays are coming up, the children will have a lot of free time and I ask the parents to please take care of their children.”
The avatar used in the Momo Challenge was mistakenly attributed to Midori Hayashi, a Japanese doll maker, who quickly denied her connection to the doll, which she said was made by Japanese doll manufacturer the Link Factory.
“This is false news,” she told the Times of Oman.
“I didn’t make that doll. The Link Factory made this doll and exhibited it at the Vanilla Gallery. They are the ones that must be contacted for more information. I have no idea as to how this challenge began, but I really hope this can be solved.”