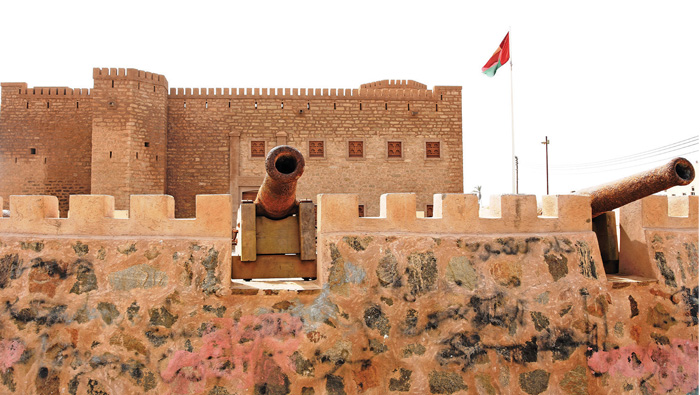 Mirbat: The Wilayat of Mirbat, which is about 74 kilometres from the city of Salalah, is one of the important historic cities in the Governorate of Dhofar, located on the plain of Jabal Samhan overlooking the Arabian Sea coast.
It was named Mirbat after the horse stall. It was famous in the ninth century AD for breeding horses and exporting them to many Arab and Islamic ports and cities, in addition to the trade of frankincense and various craft products.
The Wilayat of Mirbat has many natural tourist sites, historical monuments and buildings of ancient architecture, most notably the castle of Mirbat, which is one of the most important historical and archaeological sites in the wilayat. It overlooks the coast of the ancient port of Mirbat and dates back to the ninth century AD.
The Ministry of Tourism reopened the castle of Mirbat after restoration and maintenance work for tourists wishing to see the cultural and historical monuments that the Sultanate is proud of as part of its efforts to convert castles and forts to historic sites frequented by visitors from inside and outside the Sultanate.
The house of Sidov is one of the most important archaeological and historical landmarks of the unique architectural structure that embodies the traditional Arab architecture and dates back to about 200 years. It was built of stone, clay and wood. The house is also known as “Nizwa”. The Ministry of Heritage and Culture is currently implementing a project to convert the house into a cultural centre.
The old market of Mirbat, located near the castle, is one of the oldest historical markets for the sale of goods imported from India, East Africa, Basra and Aden, such as dates, leather, fabrics and various local products that were arriving through the port of Mirbat, in addition to the Omani frankincense, which was the main commodity in this market.
The Wilayat of Mirbat is also famous for the beautiful beaches and bays, which are considered to be the most important tourist attractions because of its beauty and rare marine resources. There is an active tourist movement throughout the year, especially during weekends to enjoy fishing and seeing the coral reefs.
In the Wilayat of Mirbat, there are many rare marine fisheries, the most famous of which are Abalone and Lobster, which are considered one of the richest marine fisheries.
Abalone can be found in the beaches between Mirbat and the Niyabat of Sharbathat in the Wilayat of Shalim and Al Halaniyat Islands.
The port of Mirbat is one of the sites frequented by tourists and visitors. The Ministry of Agriculture and Fisheries has set a plan to develop and expand the port and the establishment of facilities for fishermen and visitors.
Jabal Samhan “Samhan Mountain” is a tourist destination as it is one of the most important mountain ranges in the Governorate of Dhofar with a maximum height of 2,100 meters. There are various types of plants with some Acacia tortilis and frankincense trees.
Samhan is known for having a number of wild animals, such as the Arabian Tiger, Arabian Ghazal, Foxes and Nubian Ibex.
Hiyour Cave is located at the top of Jabal Samhan. It is considered as one of the most important tourist places because of its mountainous location overlooking the Wilayat of Mirbat. The Ministry of Tourism funded by Salalah Methanol Company to develop the cave by providing places to sit inside the cave, in addition to walkways. The second stage of the development includes the construction of additional walkways and umbrellas around the site, the expansion of parking spaces and lighting, as well as the establishment of a camping area and platforms with a telescope for wildlife viewing in Wadi Samhan.
Tawi Ateer Sinkhole, known as “Birds Well”, is a natural tourist attraction in the Wilaya. It is about 112 meters deep, 130 - 150 meters in diameter. It is one of the largest sinkholes in the world. It is located within walking distance of the north of the administrative center. There is a paved road to the site and parking.
Teeq Cave is also located in the same area. It is 170,000 square meters in size and is the second largest cave in the world. It has at least 6 entrances and wall, which can be seen from above Teeq Cave and can accessed through narrow pathways. The cave is about 14 kilometers from the Niyabat of Tawi Ateer. There is a paved road to the surrounding area as well as parking lots.
The Gravity Area in the Niyabat of Tawi Ateer is one of the tourist sites that attract visitors due to a strange and rare phenomenon that attracts some visitors, where cars go up instead of down. The area is located at the beginning of “Hshir Aqaba” on the off-road from the main road leading to the Wilayat of Mirbat.
There are in the Wilayat of Mirbat, like other wilayats of the Sultanate, many projects that serve the tourist and economic activities. The 36 km dual Taqa-Mirbat Road was opened this year for traffic, in addition to the roads leading to tourist landmarks in the area.