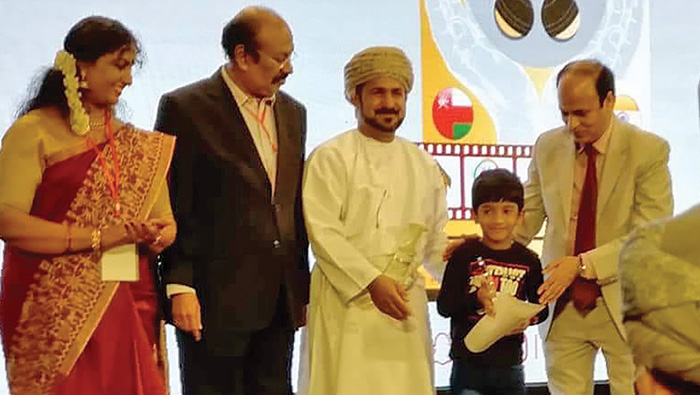 Muscat: The Oman Film Society (OFS) gave away nine movie awards at the Indian embassy auditorium on Friday.
These included the Best Short Feature, Best Director, Best Actor, Best Actress, Best Screenplay Writer, and Best Photographer awards.
The award ceremony came at the end of the first edition of the three-day long Oman-India Film Festival, which was conducted from Wednesday to Friday. OFS said that it would, henceforth, be an annual event to be held in September starting next year.
The Best Child Actress award was won by Shikha Al Amry for the Film, “Be My Mum”. Jaber Qasim was judged the Best Child Actor for the film, “Ho karam”. Abhimanyu Aneesh Chandran also won the same award for his performance in “Marathon for a Meal”.
The Best Cinematographer was won by Sudhin Vasu for his work in the movie, “Dear News Editor”. Lithin Raj Punalur won the Best Screenplay for the film, “Third Eye”.
Habiba Al Salti bagged the Best Actress award for “Be My Mum”. Prakash Purakkad won the Best Actor prize for the movie, “Nigamanangal (The Conclusions)”.
Tasleem won the Best Director award for “Ayudham Pazhagu”. “Soliloquy” was adjudged the Best Film and was directed by Jerry Jacob.
As many as 32 films were shortlisted for the festival, of which 10 short films were shown during the first two days of the festival at the Oman Journalists’ Association headquarters in Ghala. Of the 32, 10 were Arabic-language films, 10 were made by Omani directors, and another two were by Indian directors, directing in Arabic.
The other languages spoken in the shortlisted films were Tamil, Malayalam, Bengali, and English, while two were silent films.
There were five jury members, two from India and three from Oman. The jury president was Samaah Al Issa and the panel also included film directors Ammar Al Ibrahim, Laila Habib, Raja Selin, and Dorasi Das.
OFS committee member Shilin Poyyara said they had found the first edition of the film festival encouraging, adding that he had big hopes for the same event in the subsequent years.
“We found the reaction to the event very encouraging. This year alone, we had shortlisted 32 movies. Hopefully, in the coming years, the number will increase. This time around, we received only one submission in the under-19 category,” he said.
“This was because students under 19 are on vacation and couldn’t or wouldn’t participate. The fact that we are holding the competition in September next year will ensure that we get enough participants in the under-19 category,” he added.
The OFS committee member said that the Arabic movies received a lot of praise.
“The judges were very pleased with some of the Arabic movies. Also, the fact that the Arabic movies were played with sub-titles helped non-Arabic speakers appreciate them as well. Omani artistes also bagged prizes,” Poyyara added.