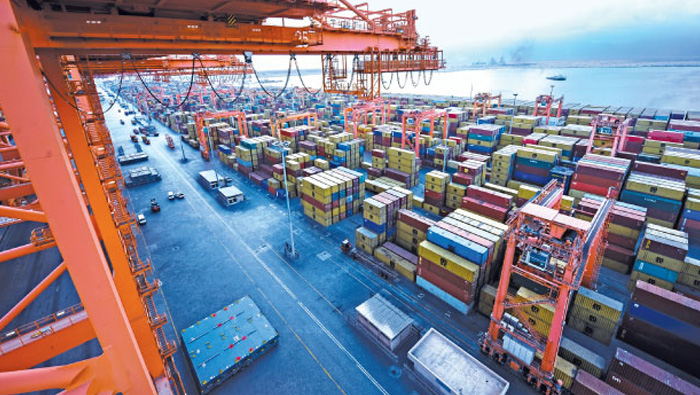 Muscat: Oman’s shift towards a non-oil future and as a dominant player in the shipping, transportation and logistics sectors is steadily gaining momentum, and showing a positive outlook towards the future.
According to a new report released by the Central Bank of Oman (CBO), the top financial authority in the country, revenues from Oman’s ports and airports skyrocketed by more than 35 per cent last year.
The annual report stated that airport revenue increased by 42 per cent, while revenue from ports soared by 37.5 per cent. While airport revenue stood at OMR49.1 million in 2016, it jumped to OMR69.7 million last year, an increase of more than OMR20 million.
Aviation sector
“Oman is continuously looking at achieving regional and international leadership in the aviation sector, commensurate with the volume of investments implemented by the government in the development of aviation infrastructure in the Sultanate. This led to an increase in the passenger market during the last few years, flights, transit aircraft and annual rates of revenue,” said an official at the Public Authority for Civil Aviation.
Oman has also ploughed plenty of resources into the development of its ports, given its
strategic location on the open sea, with the ports of Sohar, Duqm and Salalah providing it with direct access to the Indian Ocean trade routes, making it a key player in regional trade.
Oman’s location means it is a key node in trade routes that stretch as far as Africa, the Indian Subcontinent, South East Asia and China. Through the Suez Canal, it also has access to the European markets.
Oman’s location in the Middle East also sees it retain control over the Strait of Hormuz, through its northern Governorate of Musandam, through which 30 per cent of all petroleum products are shipped around the world, and some 23 per cent of all petroleum products, in general, travel.
The Wusta Governorate is home to some of Oman’s most precious mineral resources, which have been seeing great demand in the overseas markets.
Port revenue climbed from OMR0.8 million to OMR1.1 million, and Reggy Vermeulen, CEO of the Port of Duqm, said this number is only set to increase in the future.
“In the case of the Port of Duqm, yes, we can say that our revenue is considerably increasing year-on-year, mainly because we are increasing our exports of minerals and oil and gas, as well as project cargos and operational cargos. Altogether, there is a significant jump in the rate of revenue. Qatar and India are our two main destinations at the moment,” Said Reggy Vermeulen, the Chief Executive Officer at Duqm port.
“We are still under construction, and this is still going on, so we are still under early operations, since we are constructing and operating at the same time, but that being said, by 2019-2020, when the port is completed, we will really accelerate and gear up activities at the Port of Duqm,” he added.
Over in the southern Dhofar Governorate, the Salalah Port and Freezone is also set to become a vital player in regional transshipment, as it saves cargo ships plenty of time and fuel by providing them a trading hub with
easy access.
“The port has been focusing on developing hinterland volumes and will continue to develop the value added services it offers to customers, enabling them to make the most of the opportunities available and to boost the port’s revenue,” said Andrew Dawes, CEO of Salalah Port.
“The container shipping business is expected to remain stable with continued strong support from key customers.
“The company, however, is gearing up to improve customer services and productivity to meet the demand from global shipping lines,” he said.
He added: “The Port of Salalah will work to encourage more import and export trade from the local market and will support burgeoning businesses in the Free Zone to help them reach global markets. The company expects General Cargo Terminal volumes to remain stable over the coming year, after continued growth over the last several years. Volume increases, if any, are expected to be handled mainly through planned investment in equipment for handling aggregates.”
In keeping with what the CEOs of the two ports said, mining revenues did rise strongly. Oman exported 11,000 metric tonnes of salt in 2017, up from 4,500 metric tonnes in 2016, while kaolinite (199,500 metric tonnes compared with 173,800 metric tonnes) and silica (30,100 metric tonnes, up from 17,400 metric tonnes) exports also rose. Mining and quarrying accounted for OMR151.5 million of the country’s Gross Domestic Product for 2017, up from OMR131 million in the previous year, and mining revenue amounted to OMR15.3 million in 2017, up from OMR12.2 million in 2016.
Commenting on Oman’s economic activity for the year 2016-17, Sultan bin Salim Al Habsi, Deputy Chairman of the Central Bank of Oman, said: “The recovery in oil prices also contributed to fiscal consolidation through augmenting hydrocarbon revenues which surged by 19.6 per cent in 2017. The government, however, remained focused on the fiscal measures, aimed at expenditure rationalisation and increasing non-oil revenues. Government expenditure declined by 4.9 per cent during 2017, which was a drop for the third year in a row. Consequently, the fiscal deficit narrowed to some OMR3.8 billion in 2017 from OMR5.3 billion during 2016.
“The government mainly financed the fiscal deficit through external borrowings, in view of relatively lower funding cost and to avoid crowding out of the domestic private investment,” he added.
“A part of the fiscal deficit was also funded through domestic market borrowing to develop the domestic debt market and improve financial deepening,” he added.