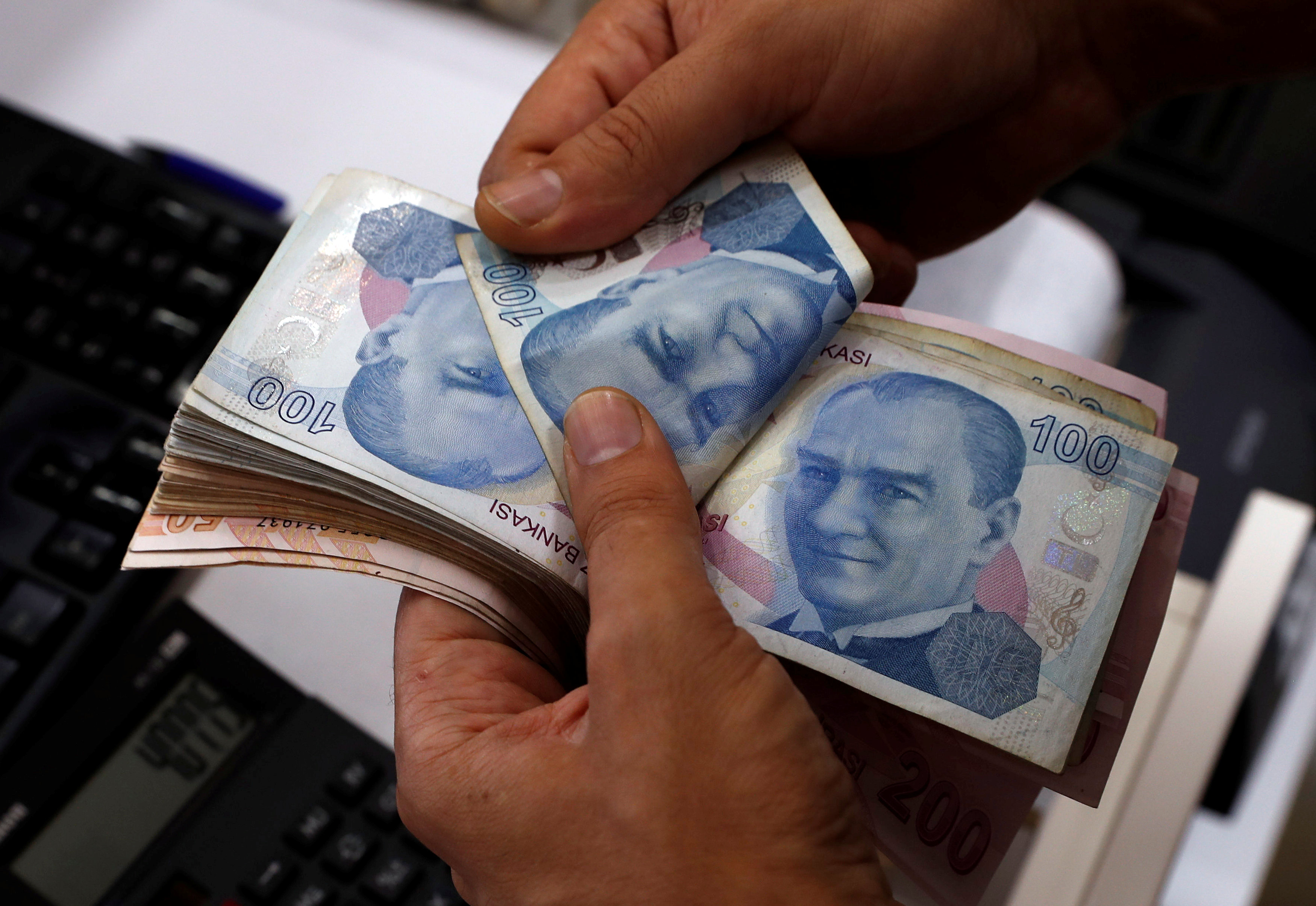 Istanbul: Turkey's lira slipped in and out of negative territory on Tuesday, staying close to the previous day's record low as concerns deepened about a rift with the United States and President Tayyip Erdogan's influence over the central bank.
On Monday, the currency fell as much as 5.5 per cent to 5.4250 against the dollar, an all-time low and its biggest intraday drop in nearly a decade, after Washington said it was reviewing access to the US market for Turkey's exports.
It was trading at 5.3035 to the dollar at 1201 GMT and at 6.1535 per euro. Turkey's 10-year benchmark bond yield hit 20.09 per cent, the highest on record.
The depth of the sell-off reflects growing unease about the direction of monetary policy under Erdogan, a self-described "enemy of interest rates", and the impact of worsening ties with the United States, a NATO ally and major trading partner.
The lira's chronic weakness -- it is down 27 per cent on the dollar and 26 per cent against the euro year-to-date -- has driven inflation to nearly 16 per cent and fuelled expectations that an emergency rate hike may be needed to prop it up.
"The plunge in the currency over the past few weeks is now on a scale which has, in the past, prompted the central bank to hike interest rates aggressively," William Jackson of Capital Economics said in a note to clients.
"The lira's fall is being amplified by concerns that the central bank will not act to shore up the currency."
The central bank raised interest rates to support the lira in an emergency move in May, before a re-elected Erdogan assumed new executive powers that investors fear will compromise its independence.
The president wants lower borrowing costs to fuel credit growth and economic expansion. Economists say the economy is overheated and needs higher rates.
The central bank's apparent reluctance to hike has heightened concerns about its ability to act independently of Erdogan, who appointed his son-in-law Berat Albayrak as treasury and finance minister last month.
The row with the United States has only served to further undermine sentiment among foreign investors, upon whom Turkey relies to fund its widening current account deficit.
Broadcaster CNN Turk reported overnight, citing diplomatic sources, that a Turkish delegation will head to Washington in two days to discuss the row between the NATO allies.
Relations have been strained by differences over Syria, and the trial in Turkey of US evangelical Christian pastor Andrew Brunson for allegedly supporting the group Ankara blames for an attempted coup in 2016. Brunson denies the charge.
Over the weekend, the US Trade Representative said the United States was reviewing Turkey's duty-free access to its markets, after Ankara imposed retaliatory tariffs on US goods in response to American tariffs on steel and aluminium. The move could affect $1.7 billion of Turkish exports.
The spat has further hammered the lira, which lost nearly a quarter of its value last year, even after a cut to the upper limit of banks' reserve requirements that the central bank said on Monday would provide lenders with $2.2 billion of liquidity.
"In an environment where the market expects an interest rate hike, the central bank only changed reserve requirements," said economist Mahfi Egilmez on Twitter.
"The lira plunged as markets got the impression that the central bank has problems hiking rates. It would have been better if they did not change the reserve requirements at all."
Erdogan, who has previously cast lira selling as the work of Western financiers attempting to bring Turkey to its knees, has been notably quiet about the crisis this time around. Last week, he called on Turks to convert hard currency and gold into lira and said Turkey would turn to Chinese markets for financing.
Local media made little mention of the currency crisis on Tuesday, with almost none of more than 20 mainstream newspapers mentioning the sell-off. It made headlines of some opposition newspapers and the main business paper.
The lira's plunge has sharpened investor concern about the outlook for Turkish companies. They have for years borrowed in hard currency, drawn by lower interest rates, but the lira crisis has made it more expensive to repay that debt.
Credit ratings agency Moody's has predicted problem loans will rise to well above 4 per cent in the next 12-18 months, from 2.9 per cent from May, which would also be costly for banks.
Goldman Sachs meanwhile warned that a further drop in the lira could wipe out Turkish banks' capital buffers.
As of May, Turkish companies had $222.8 billion in long-term loans from abroad, almost all in dollars or euros, central bank data shows.
Turkish stocks were up half a per cent. The BIST index of blue-chip stocks is down 40 per cent in dollar terms this year, according to Thomson Reuters data -- second only to Venezuela as the worst performer among some 30 emerging market stock indices.