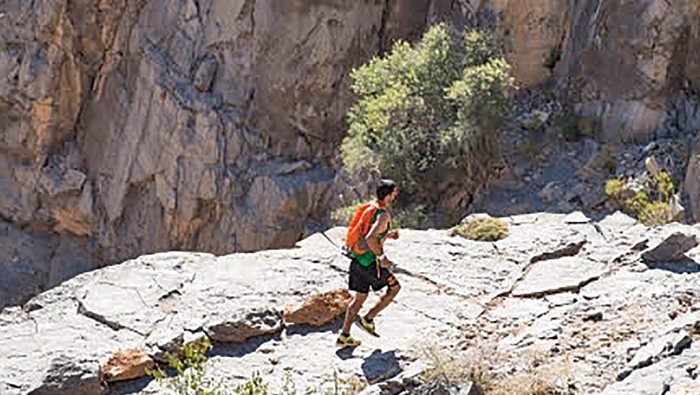 Muscat: More than 300 runners, athletes and endurance racers have already registered for a brand new endurance race that will be held in Oman this November.
The first-ever Oman UTMB—which stands for Ultra-Trail du Mont Blanc—often considered to be one of the world’s toughest marathons, is coming to the Sultanate on November 29, and with registrations closing on the final day of September, places are quickly filling up.
Athletes from more than 49 nations have already registered for the Oman by UTMB, which is being held in collaboration with Oman Sail, the country’s national outdoor sports development arm, and will see several notable names take part in the event.
Among them are the USA’s Jim Walmsley, the 2017 Ultra Runner of the Year and currently world number one in the International Trail Running Association (ITRA) rankings; Lithuanian Gediminas Grinius, who won the 2016 Ultra Trail World Tour; and Swiss 2017 Ultra Trail World champion Andrea Huser.
Also featuring will be Jason Schlarb, the top US finisher at the 2014 UTMB; former Swedish track athlete Ida Nilsson; Swiss runner Diego Pazos, aka the “bow tie trail runner; and Wyoming-based Meredith Edwards, one of the leading female runners on
the circuit.
In addition, other familiar faces are expected to include Chinese national and Hong Kong resident Tsang Siu Keung “Stone”, one of the most successful trail runners in Asia, plus others from the growing trail running community in China. Salma Al Hashmi, Oman Sail’s chief marketing officer, said she was looking forward to welcoming so many athletes to the Sultanate.
“Ultra-trail runners enjoy the challenge of mountain courses and the beauty of the natural environment, and judging by the rush to enter, OMAN by UTMB appears to have captured that enthusiasm in full.
“The authentic and unique landscapes of the Sultanate, particularly the route that takes in the heights of Jebel Akhdar, the Green Mountain, will provide an exciting and competitive event for hundreds who have seized the opportunity to take part in this first edition,” she added.
The 137-kilometre-long trail will feature a remote and rugged course, with long and technical climbs and a total vertical gain of more than 7,800m. The course was designed by the ITMB International team, of which founder Michel Poletti was a part.
“The Sultanate is like no other place I’ve run before; the spectacular scenery, incredible mountains and warm people make this a must-do event,” he said. “Having had the opportunity to revisit Oman, I can now add that the country has a fantastic amount to offer visitors, it is very safe, with much to see and do that the whole family can enjoy.”
The UTMB originally featured five races in France, with international races now added to the event. Participants in these races are awarded a number of points, based on where they finish, with the athlete who receives the total number of points being crowned champion in the end.
Finishers will earn the maximum number of six qualifying points, valid for three years instead of the usual two, and will save one year in the UTMB Mont-Blanc registration process. This will double the chance for first-time applicants in the entry lottery for 2019, and guarantee entry for those reapplying a second time after being unsuccessful in 2018.