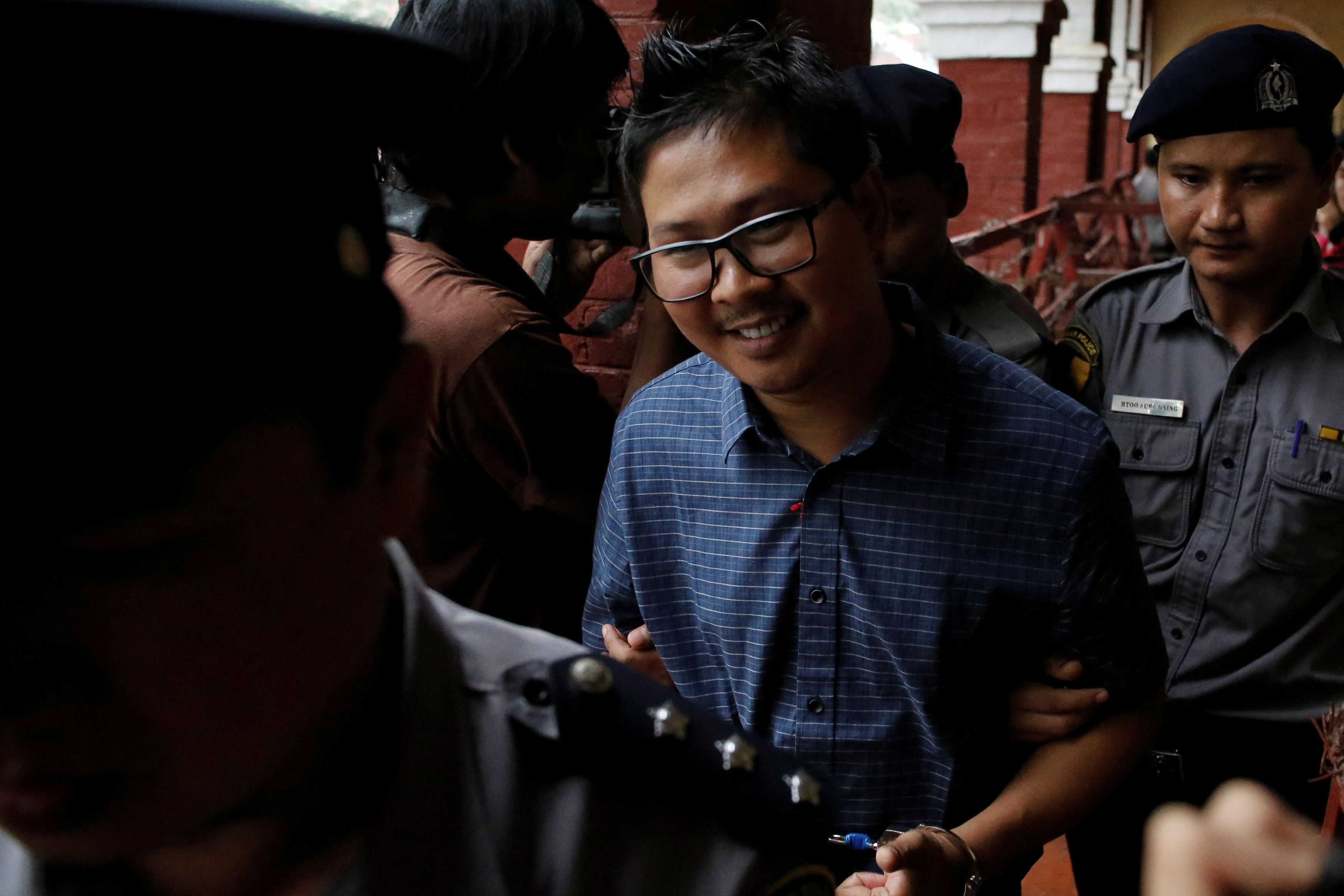 Yangon: A Myanmar court heard defence witnesses on Monday vouch for the integrity of two Reuters journalists accused of obtaining secret state documents and will hear final arguments in two weeks, when the trial regarded as a test of press freedom resumes.
Kyaw Soe Oo, 28, and Wa Lone, 32, are facing up to 14 years in prison for allegedly violating Myanmar's colonial-era Official Secrets Act. Both have pleaded not guilty to the charges and have told the court how they were "trapped" by police officials who planted documents on them.
During Monday's session, their former teacher Ye Naing Moe, director of Yangon Journalism School, praised both reporters as curious and excellent students who had won multiple awards for stories focusing on the underprivileged and social issues.
"We haven't seen any stories they wrote which have violated media ethics," he said, explaining that the school monitored the work of its former students.
"I believe that Wa Lone and Kyaw Soe Oo performed the most important role of journalists which is revealing the truth,” said Ye Naing Moe. "Finding defects, problems and revealing them in a positive way gives a chance to fix things and that benefits the society and the country.”
A second witness, Thant Zin Soe, had worked with Wa Lone at a charity distributing humanitarian aid to the victims of natural disasters and described him as being consistently ethical, and "disgusted by corruption".
At the time of their arrest in December, the journalists had been investigating the killing of 10 Rohingya Muslims in Inn Din village in western Myanmar’s Rakhine state.
The killings took place during an army crackdown that United Nations agencies say sent some 700,000 people fleeing to Bangladesh.
Prosecutor Moe Thu Aung's questioned the witnesses over whether they could have known what the intentions of the defendants were while they were reporting and whether they believed the journalists would behave unethically.
He declined to comment after the proceedings.
The trial has captured global attention and has come to be seen as a test of press freedom and reforms in the fledgling democracy, where the military still wields considerable influence.
US Secretary of State Mike Pompeo called for the immediate release of the reporters on Saturday. UN Human Rights chief, Zeid Raad Al Hussein, has also recently called for the case to be dropped "immediately".
Government spokesman, Zaw Htay, told Reuters by phone that Myanmar's courts are independent and the case would be conducted according to the law. He said "they will have the full protection of their rights as citizens.
Judge Ye Lwin adjourned the court and scheduled final arguments from both the prosecution and defence to be heard in two weeks. The judge will declare a verdict in the weeks following the final arguments, according to legal experts.
On Monday, Kyaw Soe Oo's wife and daughter and Wa Lone's pregnant wife, who is just four days away from her delivery date, sat in a courtroom packed with diplomats.
"The day of decision will arrive soon. We believe that it will proceed in a fair and just way," said Wa Lone, before he was taken back to jail. Kyaw Soe Oo and Wa Lone have testified that Police Lance Corporal Naing Lin and another officer handed them documents during their meeting at a north Yangon restaurant, but that they had no time to look at them before being arrested as they left.
A police captain, Moe Yan Naing, has also testified that a superior officer had instructed his subordinates, including Naing Lin, to "trap” the reporters. Naing Lin has told the court he met the reporters, but denied giving them anything.
Other police witnesses have previously told the court the reporters were arrested at a random security checkpoint, by officers who were unaware they were journalists, and found to be holding secret documents in their hands.