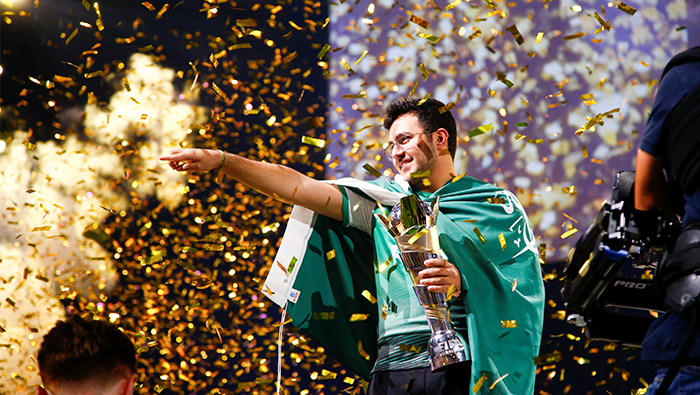 Muscat: Mosaad Aldossary, a teenager from Saudi Arabia has been crowned the champion of the gaming competition FIFA eWorld Cup. The gamer won the grand final and took home a prize money of $250,000.
Aldossary won 4-0 on aggregate against Belgium’s Stefano Pinna in the two-legged final, which was live streamed to millions of people around the world.
The 18-year-old, who competes as ‘MSDossary’, also received an invitation to the world soccer body’s ‘Best FIFA Football Awards’ in September and a gleaming new trophy.
“I’m really proud that I made my country proud,” said the Saudi after winning each leg 2-0 on PlayStation and Xbox consoles, while a frustrated Pinna failed to find a way through on goal.
The two men faced each other on a central stage at London's O2 Arena, separated only by their screens.
"This is my second event in the UK and second win so I think this is my second home. I hope every year I am the champion again," said the teenager, who had a cousin sitting with him as coach.
Regarded as one of the best defensive players, Aldossary also won the FUT Spring Cup in Manchester on his way to the 32-player finals.
He had one glaring missed opportunity in the first leg when one-on-one with the goalkeeper but a brace from former Brazilian World Cup star Ronaldo on the PlayStation side and then goals from Thierry Henry and Ruud Gullit in the Xbox leg settled matters.
Pinna also had former Dutch international Gullit in his virtual side, prompting the curious commentary line: "Gullit on Gullit, and he's lost out."
"It was difficult for me, especially on the Xbox side," said 20-year-old Pinna, who recently signed for PSV Eindhoven's esports side. "On the Playstation side I didn't score my chances and he did well.
"He didn't let me play my game style because of his pressure. His defence is amazing."
The Grand Final, live-streamed around the world on Twitch, Twitter, YouTube, Facebook and fifa's own platform, was the culmination of a virtual championship that started out with a global pool of 20 million entrants.
Last year's winner, 21-year-old Spencer Ealing from England who plays under the nickname 'Gorilla', went out in the knockout stages to Malta's Kurt 'Kurt0411'