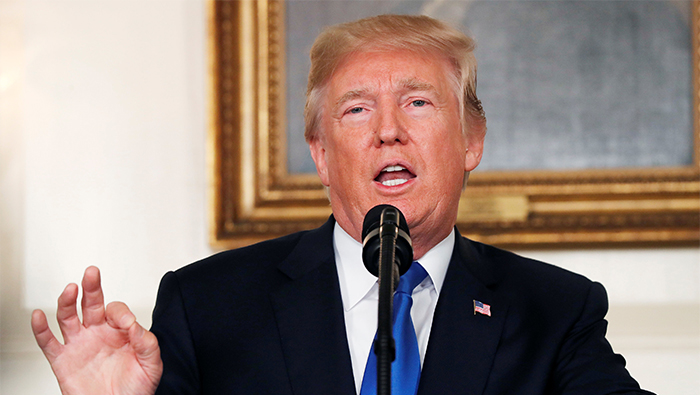 Seoul: U.S. President Donald Trump said on Thursday he looked forward to meeting Kim Jong Un soon and thanked the North Korean leader for sending the suspected remains of U.S. soldiers killed in the 1950-1953 Korean War back to the United States.
"Thank you to Chairman Kim Jong Un for keeping your word & starting the process of sending home the remains of our great and beloved missing fallen! I am not at all surprised that you took this kind action," Trump wrote in a Twitter message.
"Also, thank you for your nice letter - I look forward to seeing you soon!", Trump said, without elaborating.
The pledge to return the remains of U.S. soldiers was made during a landmark summit between Trump and Kim in June in Singapore, where North Korea committed to work towards the complete denuclearisation of the Korean peninsula.
Kim sent a letter to Trump in mid-July in which the North Korean leader said he hoped there would be a second meeting between the two but it was unclear if that was the "nice letter" to which Trump referred on Thursday.
Trump also took to Twitter earlier to praise an "incredibly beautiful ceremony" in Hawaii, where Vice President Mike Pence helped welcome the remains to the United States.
The United States said during a solemn ceremony on Wednesday the human remains presumably included Americans killed in the Korean War and thanked North Korea for making good on its pledge to hand them over.
The pledge to transfer war remains was seen as a goodwill gesture by Kim at the Singapore summit and was the most concrete agreement reached by the two sides so far.
"I know that President Trump is grateful that Chairman Kim has kept his word, and we see today this tangible progress in our efforts to achieve peace on the Korean peninsula," said Pence, whose father fought in the Korean War.
More than 7,700 U.S. troops remain unaccounted for from the Korea War. About 5,300 were lost in what is now North Korea.
Other countries under the command of the United Nations also lost troops that are still unaccounted for, including the United Kingdom, Australia and Canada.
Experts say positively identifying the decades-old remains could take anywhere from days to decades.
Still, an initial field forensic review indicated the "remains are what North Korea said they were", John Byrd, director of analysis for the U.S. Defense POW/MIA Accounting Agency, told reporters at an air base in South Korea before the remains were flown to Hawaii.