Cricket: England slump as India strike back in final session 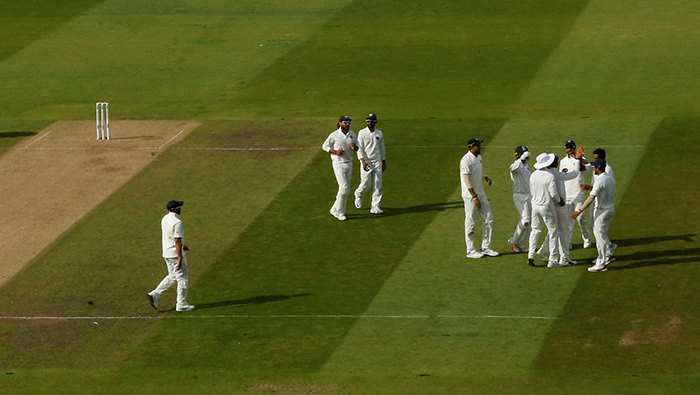 Birmingham: England collapsed in the final session on day one of the first test against India, losing six wickets for 67 runs as they limped to the close on 285 for nine on Wednesday.
England captain Joe Root top scored for the hosts with a fluent 80 runs but his run out from a brilliant throw by Virat Kohli sparked their demise.
England, who were 216 for four when Root was dismissed, lost their next four wickets for 27 runs, with spinner Ravichandran Ashwin, who ended the day with four wickets, inflicting the bulk of the damage for the visitors.
Electing to bat after winning the toss, England had made a solid start to their innings, reaching 83 at lunch in a morning session that offered some early help to the fast bowlers. The confident start almost threatened to unravel in the afternoon before Root and Jonny Bairstow steadied the ship with a 104-run partnership for the fourth wicket.
In England's 1,000th test match, opener Keaton Jennings was dropped on nine, but moved to 42 before being bowled by Mohammed Shami, while Bairstow looked confident on his way to 70 runs off 88 deliveries.
India's seam attack struggled to extract much help from the pitch and the visitors' one success before lunch was a ripper from off-spinner Ashwin that removed Alastair Cook for 13.
The 33-year-old had struck two handsome boundaries off Umesh Radav but in Ashwin's second over he played forward to a ball that drifted in towards middle stump before straightening past Cook's outside edge and clattering off stump.
After Cook's dismissal, Shami continued to look dangerous for India - beating Jennings with a beauty in the 21st over.
Shami took the wicket of Jennings midway through the afternoon while Dawid Malan could only score eight before becoming the Indian medium pacer's second victim of the day.