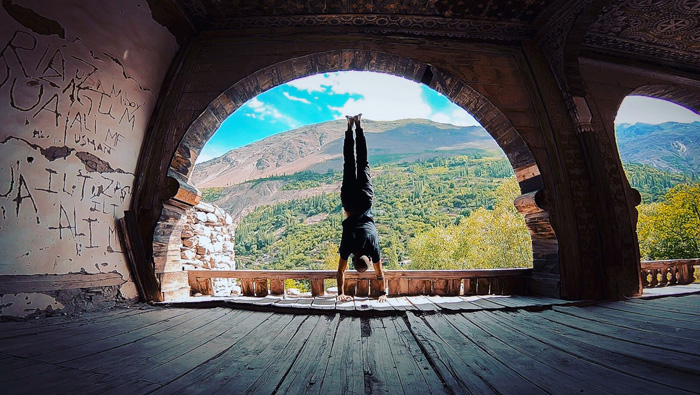 Muscat: Omani wellness coach and peace activist Fahad Al Abri is planning to perform a handstand in front of Karachi’s most famous monument to thank the people of Pakistan for the hospitality they extended to him during a recent trip to the South Asian country.
Renowned for his famous handstands, Al Abri visited Pakistan in July as part of the “Pakistan Awaits” initiative. The non-profit humanitarian endeavour was founded by Huzaifa Ubaid Khan, a Pakistani expat living in Oman, to help combat negative stereotypes and misconceptions associated with his country.
Fahad (cavemanagram) was joined by social media influencers Hiyam Al Jabri (hiyamoman) and Dana Al Qadhi (dan_alqadhi) on an extraordinary journey to Islamabad, Gilgit-Baltistan, the Karakoram Highway, and the Pakistan-China border.
“Every monument has a story,” Al Abri told the Times of Oman. “I do handstands at monuments to honour their story and the history of the great achievements of the civilisation that blessed that land.”
“The reason I do handstands is to promote peace through well-being and carry the message of ‘seeing the world from a different perspective’,” he added.
In honour of the people of Pakistan, Al Abri will travel to the South Asian country today to perform a handstand in front of the famous Mausoleum of Mohammad Ali Jinnah in Karachi.
“I’m thanking the Pakistani people for their great hospitality,” shared Al Abri.
“We were welcomed to a great nation that did its best to show that it is not only beautiful but peaceful as well. Despite what they have faced in the past and the global media’s fixation with portraying Pakistan through stereotypes, Pakistan and its people have never given up trying to share and show their true selves.”
Al Abri said he decided to go to Pakistan to help dispel the many negative and unfair portrayals of the country.
“I want to change this perspective through my journey,” he explained.
“Pakistan is one of the most beautiful countries I have visited, and I hope this message, through my handstand journey, will be shared across the globe.”
Al Abri’s handstands have taken him around the world, allowing him to promote peace in dozens of cities and countries across multiple continents.
“What inspired me was Banksy,” he revealed. “He dedicated himself to the art of graffiti to send his message everywhere he travelled. I chose the handstand to share my message.”