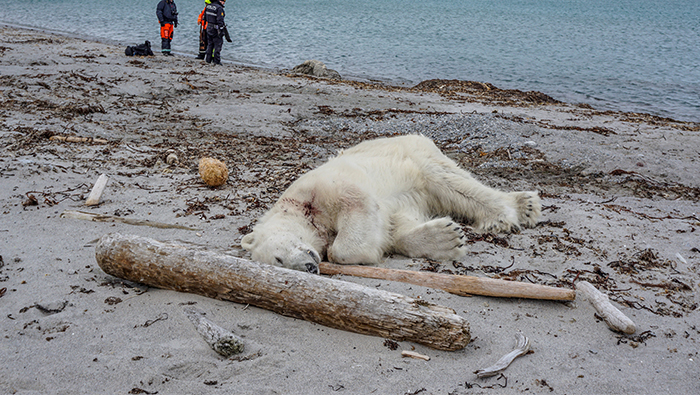 Muscat: A German cruise line is facing outrage after one of its employees shot and killed a wild polar bear in Norway after the animal attacked another employee.
The guard was accompanying a tourist expedition aboard the MS Bremen of Hapag-Lloyd Cruises when the bear attacked. The worker, a designated polar bear guard, suffered a head injury as he led tourists off the ship. He was unresponsive when he was flown to Spitsbergen Island for medical treatment but is not in a life-threatening condition.
Some outraged Twitter users say the incident was a needless death of a vulnerable animal and that tourists shouldn't have been in the polar bear's natural habitat in first place.
NPR Comedian Ricky Gervais led the condemnation, sarcastically tweeting, "Let's get too close to a polar bear in its natural environment and then kill it if it gets too close".
The Leader of the Welsh Liberal Democrats, Jane Dodds, also responded to the news, posting, "Horrendous news! I simply don’t understand why companies encroach on areas which the Polar Bears have made their own. It’s dangerous and as this sadly shows often hurts the Polar Bears. We should be protecting these majestic creatures, not killing them."
British broadcaster Monty Halls offered this assessment of the incident, "This should never happen - one thing my recent trip to Svalbard taught me, in the company of excellent, cautious, super safety-conscience guides, was that there's only one side to blame in this type of incident. Hope the guide is okay, but how shocking."