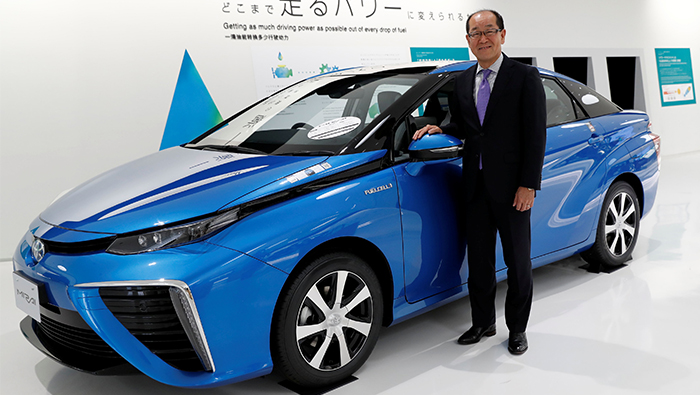 Japan: Toyota Motor Corp is doubling down on its investment in hydrogen fuel cell vehicles, designing lower-cost, mass-market passenger cars and SUVs and pushing the technology into buses and trucks to build economies of scale.
As Toyota cranks up improvements for the next generation of its Mirai hydrogen fuel cell vehicle (FCV), expected in the early 2020s, it is hoping it can prove wrong rival automakers and industry experts who have mostly dismissed such plans as commercially unviable.
The maker of the Prius, the world's first mass-produced "eco-friendly" gasoline-hybrid car in the 1990s, says it can popularise FCVs in part by making them cheaper.
"We're going to shift from limited production to mass production, reduce the amount of expensive materials like platinum used in FCV components, and make the system more compact and powerful," Yoshikazu Tanaka, chief engineer of the Mirai, said in an interview with Reuters.
It is planning a phased introduction of other FCV models, including a range of SUVs, pick-up trucks, and commercial trucks beginning around 2025, a source with knowledge of the automaker's plans said.
The automaker declined to comment on specific future product plans. But it has developed FCV prototypes of small delivery vehicles and large transport trucks based on models already on the road, as Tesla Inc develops a battery-operated commercial semi-truck from the ground up.
"We're going to use as many parts from existing passenger cars and other models as possible in fuel cell trucks," said Ikuo Ota, manager of new business planning for fuel cell projects at Toyota. "Otherwise, we won't see the benefits of mass production."
The company is also betting on improved performance. Toyota wants to push the driving range of the next Mirai to 700-750 kilometres from around 500 kilometres, and to hit 1,000 kilometres by 2025, a separate source said.
Driven by the belief that hydrogen will become a key source of clean energy in the next 100 years, Toyota has been developing FCVs since the early 1990s.
Hydrogen is the most abundant element in the universe and stores more energy than a battery of equivalent weight.
The Mirai was the world's first production FCV when it was launched in 2014. But its high cost, around $60,000 before government incentives, and lack of refuelling infrastructure have limited its appeal. Fewer than 6,000 have been sold globally.
LMC Automotive forecasts FCVs to make up only 0.2 per cent of global passenger car sales in 2027, compared with 11.7 per cent for battery EVs. The International Energy Agency predicts fewer FCVs than battery-powered and plug-in hybrid electric vehicles through 2040.
Many automakers, including Nissan Motor Co and Tesla, see battery-powered cars as a better, zero-emission solution to gasoline engines. Only a handful, including Honda Motor Co and Hyundai Motor Co, produce FCVs.
But people familiar with Toyota's plans said the automaker thinks demand will perk up as more countries, including China, warm to fuel cell technology. The company also sees FCVs as a hedge against a scarcity of key EV battery materials such as cobalt.
Hand Built
For now, Mirais are assembled by hand at a plant in Toyota City, where 13 technicians push partially constructed units into assembly bays for detailed inspections. This process yields just 6.5 cars a day, a sliver of Toyota's average domestic daily production of about 13,400 vehicles.
Strategic Analysis Inc, which has analysed costs of FCVs including the Mirai, estimates that it costs Toyota about $11,000 to produce each of its fuel cell stacks, by far the vehicles' most expensive part.
Toyota has been building up production capacity to change that, as it expects global FCV sales climb to 30,000 units annually after 2020 from about 3,000. Strategic Analysis estimates that would allow Toyota to reduce costs to about $8,000 per stack.
It has already begun to use parts developed for the Mirai in other models, such as the fuel cell stack, which is used in Kenworth freight trucks being tested in California, the Sora FC bus it released in Japan in March and the delivery trucks it will test with Seven-Eleven stores in Japan next year.
"It will be difficult for Toyota to lower FCV production costs if it only produces the Mirai," the first source told Reuters on condition of anonymity as he was not authorised to speak publicly about the issue.
"By using the FCV system in larger models, it is looking to lower costs by mass-producing and using common parts across vehicle classes," he added.
The Mirai's high production costs are largely due to expensive materials including platinum, titanium and carbon fibre used in the fuel cell and hydrogen storage systems.
Engineers have been reducing that by improving the platinum catalyst, a key component in the 370 layered cells in the fuel cell stack, which facilitates the reaction between hydrogen and oxygen that produces electricity.
"We've been able to decrease the platinum loading by 10 per cent to 20 per cent and deliver the same performance," said Eri Ichikawa, a fuel cell engineer at Cataler Corp, a Toyota subsidiary that specialises in catalytic converters.
Strategic Analysis says using that much less of the precious metal would save up to $300 per fuel cell stack, based on an estimate that Toyota now uses about 30 grams of platinum per unit.
"By consistently focusing on these issues, we will be able to progressively lower the cost of FCVs in the future," Tanaka said.