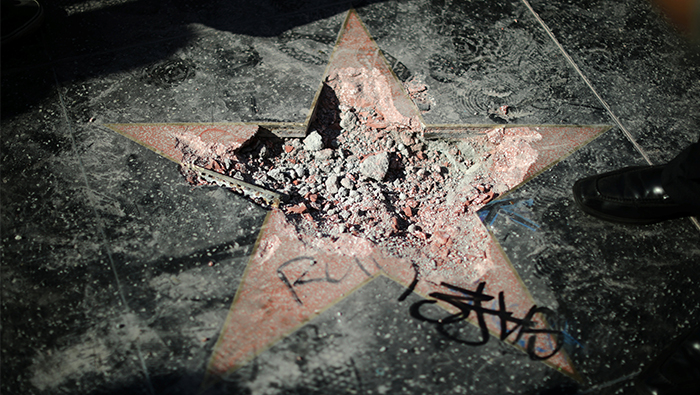 Los Angeles: A man with a pickax vandalised U.S. President Donald Trump's star on the Hollywood Walk of Fame early on Wednesday and later surrendered to police, a spokesman for the Los Angeles Police Department said.
"A pickax was used in vandalising the star" embedded in the sidewalk near Hollywood Boulevard and Highland Avenue in Los Angeles at about 3:30 am, Sergeant Ray Brown of the LAPD said by telephone.
Installed in 2007, Trump's star has been frequently vandalised since he was elected president in 2016.
The suspect, 24-year-old Austin Clay, was in custody at the Los Angeles County Jail on a charge of felony vandalism with a bail of $20,000, jail records showed.
As pedestrians walked by the site, in an area popular with tourists, Gregg Donovan, 58, of Los Angeles, stood by with a "Trump 2020" sign, saying he was protecting it from further damage.
"It's a California landmark," Donovan said. "Don't take your anger out on a tourist landmark."
The star was nearly completely destroyed, and there was graffiti scrawled on it.
Before being elected president, Trump, 72, was a real estate developer-turned-reality TV star who was producer of the NBC show, "The Apprentice", and the Miss Universe Pageants.
The suspect pulled a pickax out of a guitar case before striking Trump's sidewalk honor, the Los Angeles Times reported.
Adrian Rodriguez, a 42-year-old Los Angeles schoolteacher, said: "I don't condone vandalism but I can certainly see the frustration... I’m not for Trump but I disagree with this type of protest."