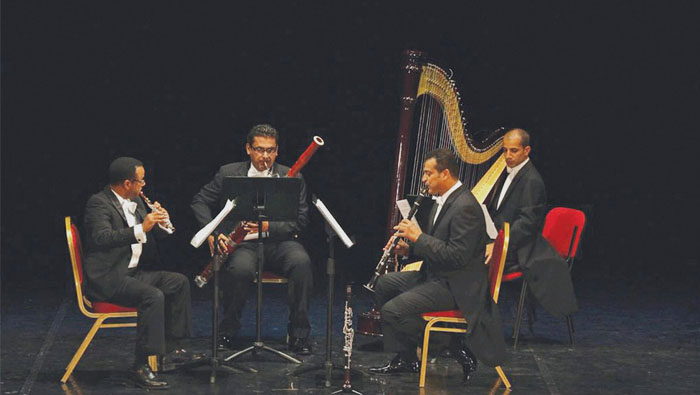 St. Petersburg: The National Museum and the National Records and Archives Authority (NRAA) opened at the Apollo Hall of the Hermitage Museum in St. Petersburg in the Russian Federation, the first international joint exhibition to be held until the end of September.
The exhibition came as part of the cultural events hosted by the Hermitage Museum under the name of “Day of Oman” within the framework of the memorandum of understanding (MoU) concluded between the Russian museum and the Sultanate’s National Museum to celebrate the Omani Renaissance Day.
The exhibition includes a very rare piece of a powder cartridge from northern Oman, made of brass with traces of silver designed to fill the nozzle of the locally called “Abufitila” gun with powder, belonging to the period of Imam Said bin Ahmed Al Busaidi (1783-1810), the second ruler of Al Busaidi Family in Oman. It also includes a Holy Qur’an, an early example of the printed Qur’an.
Each of its pages is printed using coloured lithography, an uncommon method of printing authentic copies of the Qur’an, which requires great skill from calligrapher and engraver.
The Omani delegation was led by Dr. Hamad bin Mohammed Al Dhoyani, NRAA Chairman, Members of the Board of Trustees of the National Museum with the participation of Yousef bin Issa Al Zedjali, Sultanate’s Ambassador to the Russian Federation, Jamal bin Hassan Al Mousawi, Director General of the National Museum and Rahma bint Qasim Al-Farsiya, Director General of Museums at the Ministry of Heritage and Culture.
Various institutions from the Sultanate also took part, including the National Museum, the Ministry of Culture and Heritage, the Ministry of Tourism, NRAA, the Royal Symphony Orchestra of Oman and the Embassy of the Sultanate of Oman in the Russian Federation.