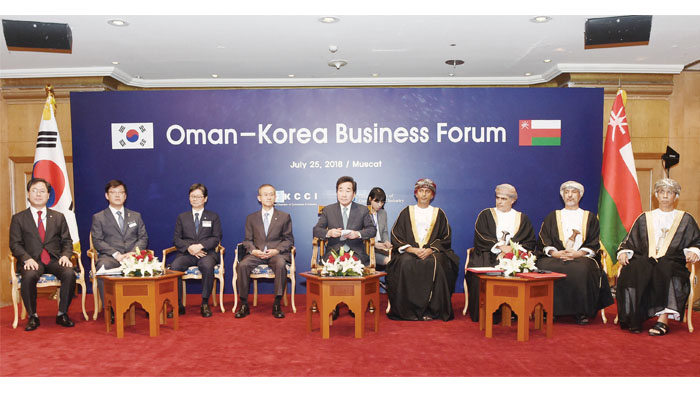 Muscat: Lee Nak-yeon, Prime Minister of the Republic of Korea, hailed the national development strategy adopted by the Sultanate since the accession of His Majesty Sultan Qaboos bin Said to the throne.
He said that the political stability witnessed by the Sultanate came through the adoption of a balanced diplomacy and diversification Economic development through implementing the five-year plans since 1976 followed by “Oman 2020 Vision” and currently “Oman Vision 2040 Future.”
The Prime Minister of the Republic of Korea added in his speech at the Omani-Korean Business Forum on Wednesday that the Sultanate of Oman is one of the exporters of liquefied natural gas (LNG) to Korea, which has helped to diversify the economy in Korea and is one of the largest markets to rely on in terms of trade volume.
He pointed out to the possibility of joint cooperation in the areas of information technology, smart cities, health, medical care, industries and fisheries in the future.
The Prime Minister of the Republic of Korea called upon businessmen of both countries to join hands and benefit from the investment and economic opportunities available especially in the fields of petrochemical industries, railways, solar power and smart cities as the Sultanate seeks to develop these areas and diversify its economy through its future plans and vision.
On his turn, Dr. Ali bin Masoud Al Sunaidy, Minister of Commerce and Industry described the Sultanate’s trade relations with the Republic of Korea as “old” as these relations focus on projects of cooperation and partnership primarily in the oil, gas, petrochemical and logistics sectors. He pointed out that the Sultanate is witnessing the implementation of new projects in the field of electricity production by solar energy with the Republic of Korea.
The Minister of Commerce and Industry expressed the hope that the businessmen meeting of the two countries will move on to wider fields, especially in the area of knowledge economy, as the two sides signed a memorandum of understanding on the establishment of smart cities in the economic zone of Al Duqm, which is a new step in cooperation and partnership.
He explained that the transformation of the Special Economic Zone into a smart city will gain the Sultanate new experiences and open the door to local and international companies, including Korean companies as there may be similar initiatives for other economic projects in Sohar, Salalah, Sur and others under design or implementation, such as Al Irfan City in the Governorate of Muscat and the Logistic City “Khazaen” in the Governorate of South Al Batinah.
For his part, Qais bin Mohammed Al Yousef, Chairman of Oman Chamber of Commerce and Industry (OCCI), said “The statistics indicate that the trade exchange between the two countries reached OMR1 billion by the end of 2017. Omani imports from Korea represent about OMR225 million and Omani exports amount to OMR844 million”.
He affirmed that there are still many opportunities that can be used in the development of trade and investment exchanges between the two friendly countries and that the two chambers of the two countries are constantly seeking to intensify efforts to strengthen relations and trade cooperation and find a mechanism to enhance the benefit of services provided by trade chambers in both countries in a better and more efficient manner.
Mohammed bin Salim Al Harthy, Sultanate’s Ambassador to the Republic of Korea said in a statement: “The visit of the Korean delegation comes within the framework of strengthening relations between the two friendly countries and enhancing areas of cooperation, expansion and deepening of broader horizons covering various sectors and fields, including logistics, industries, Health, medical care, tourism, education, research, development and innovation.”
The “Omani-Korea Business Forum” organised by the Oman Chamber of Commerce and Industry and its Korean counterpart sought to introduce businessmen and businesswomen in the two countries to investment opportunities and trade exchange in both sides, as well as enhancing communication, building business relations and exploring the possibility of strategic partnerships to increase investment and business activities between the two countries. During the forum, many video presentations were screened on the most important sections of the current five-year plan and the possibilities offered by the economic zones, free zones, ports and airports and complementary services. The investment opportunities were reviewed in the promising economic sectors in the Sultanate especially in the fields of tourism, manufacturing, fisheries, Logistics, auto parts industry, electronics industry, accessories and other fields.
The forum was attended by a number of ministers, undersecretaries, officials and businessmen from both countries.
Korean companies participating in the forum are specialised in the fields of engineering, construction, maritime trade, energy, heavy industry, telecommunications, innovation and other fields.