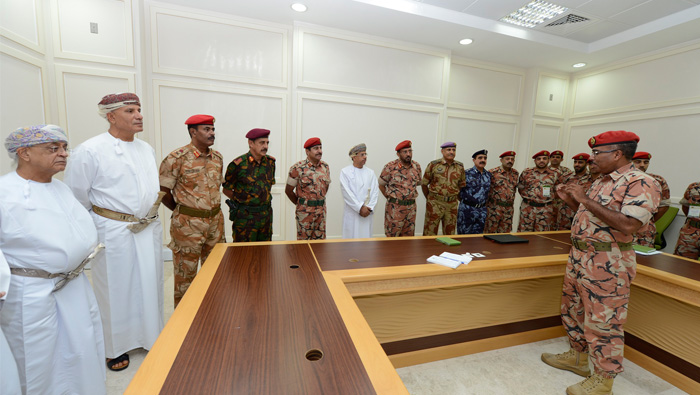 Muscat: The National Defence College (NDC) on Wednesday concluded the strategic exercise ‘Decision Making- 5’, which was implemented by participants in the 5th course at the college.
The conclusion ceremony of the exercise which started on July 8 was held under the auspices of Dr. Abdul Munim bin Mansour Al Hasani, Minister of Information.
The aim of the exercise was to train participants on how to achieve balance in the use of the state potentials and elements to achieve the strategic aims and national interests. It also trains participants on how to achieve harmony and coordination among the different sources of national power including the media means in the strategic decision making.
The Minister of Information and chief guest accompanied by invitees toured the exercise cells. Air Commodore Nasser bin Juma Al Zadjali, Strategic Instructor at the College and Head of the Exercise Coordination and Follow Up Cell made a briefing on the role of control in creating harmony between it and the performance of participants at the exercise cells to achieve the perspective aims of the exercise.
The conclusion of the exercise was attended by Maj. Gen Matar bin Salim Al Balushi, Commander of the Royal Army of Oman, Maj. Gen Amer bin Salim Al Amri, Commander of the Sultan Special Forces, Maj. Gen Khalifa bin Abdullah Al Junaibi, Commander the Royal Guard of Oman, Maj. Gen Mahad bin Mubarak Al Mashiakhi, Secretary General of the Military Affairs at the Royal Office, Maj. Gen Hamad bin Salim Al Hatmi, Assistant Inspector General of Police and Customs for operations, Maj. Gen Ahmed bin Ali Kashoub, Secretary General of the National Security Council at the Royal Office, Dr. Abdullah bin Mohammed Al Sarmi, Undersecretary of the Ministry of Higher Education, Mohammed bin Jawad bin Hassan bin Sulaiman, Advisor at the Ministry of Finance and a number of invitees from the military, security and civil authorities.