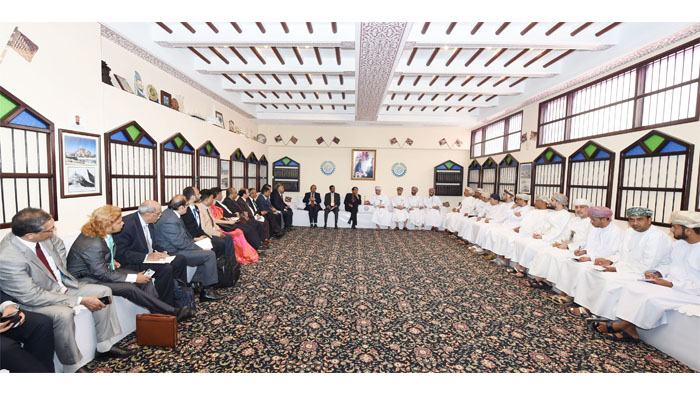 Muscat: Omani and Indian businessmen discussed ways to further enhance trade and commerce between the two countries in a series of interactions on Tuesday.
The Oman Chamber of Commerce and Industry (OCCI) on Tuesday hosted the Omani-Indian Joint Business Council meeting.
The meeting was attended by Dr. Ali bin Masoud Al Sunaidi, Minister of Commerce and Industry and Chairman of the Omani side at the Omani-Indian Joint Committee and Suresh Prabhu, Indian Minister of Commerce, Industry and Civil Aviation and Chairman of the Indian side at the Committee who is currently visiting the Sultanate accompanied by a number of Indian officials.
Dr. Salim Al Junaibi, Deputy Chairman OCCI for Economic Affairs and Branches said in a statement that this important meeting discussed means of enhancing cooperation in economic, commercial and investments fields.
It also discussed a number of investment opportunities and the possibility of business partnerships among Omani and Indian businessmen in food, petrochemical and steel fields.
Pankaj Khimji, Omani co-chair of India-Oman Joint Business Council said that the meeting discussed a number of topics that need development, such as direct export of foods from India to the Sultanate and the possibility of establishing plastic industries in the Sultanate through joint Omani- Indian ventures.
The Indian Embassy to the Sultanate also organised a meeting that gathered the Indian Minister of Commerce, Industry and Civil Aviation and the accompanying delegation with Indian traders and Omani businessmen.
The meeting discussed means of enhancing economic, commercial and tourism cooperation between the two friendly countries. The two sides explored means of enhancing cooperation between them on various economic, tourist and investment fields.
The two sides also discussed means of setting up joint ventures in the fields of foodstuff, logistics and plastic projects during which a number of presentations about the industrial estates in the Sultanate were presented.
Eng. Jamal bin Tawfiq Aziz, Deputy CEO of Sohar Industrial Port Company (SIPC) gave a briefing on Sohar Port.
He highlighted the role of the port in implementing several projects in petrochemical, aluminum, logistics and foodstuff sectors.
He pointed out that the Indian investments are considered one of the first investments in Sohar.
Presentations were also given on the Special Economic Zone in Duqm (SEZD), Salalah Port and its investment opportunities.