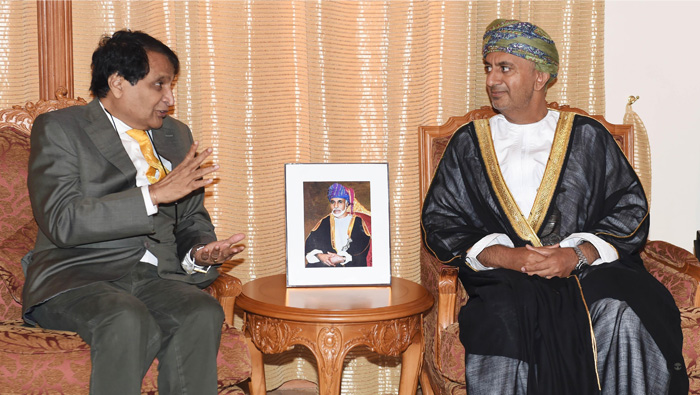 Muscat: There are massive opportunities for Oman and India to work together in the health sector, according to the Minister of Commerce and Industry, Ali bin Masoud Al Sunaidi.
Read also: Expats in Oman will soon have health cover
“We can do massive work in health insurance and medical care together,” said Al Sunaidi at a business event, alongside Suresh Prabhu, India’s Minister of Commerce and Industry and Civil Aviation. “India is strong in competitive healthcare and advanced telemedical care. There is a fibre line between us that we can pack full of medical information.”
Speaking to the Times of Oman, regarding the opportunity for cooperation in healthcare, Suresh Prabhu, said: “We are really thinking of a comprehensive package so medical tourism is promoted more.”
“We would like to ensure quality and affordable service to Omanis, because some of them will not be travelling on insurance cover,” he added.
“We will also encourage a large number of Indian companies in the private sector are getting into medicare. We would like to get them into Oman and start something here. When Omanis come there we would like to offer them some special treatment of visas etc. because they are coming for medical needs,” Prabhu said.
Also read: Tourists to receive mandatory health insurance on arrival in Oman
The Sultanate’s Minister of Commerce and Industry explained that Oman plans to make medical insurance mandatory for all people and open private hospitals in the future.
“We want to open up private hospitals,” he said. “Private hospitals will never work unless there is some kind of insurance. We have a large expat population. They need to be insured.”
Al Sunaidi said the two countries could work together to advance health services for expats and Omani citizens alike, allowing all to enjoy first-class healthcare.
Al Sunaidi also highlighted other areas of importance in the relations between the two countries, including the importation of produce. “One area of interest is the need to import more fresh vegetables and fruits from India to Oman,” he explained.
“Today, importers lose approximately 3 to 4 days of shelf-life because much of the produce that they import does not get to them directly. That is then followed by checks for pesticides, something that is not specific to any country but something we generally worry about,” said Al Sunaidi.
One way of addressing this issue is to create a company that would specialise in the trade of fresh produce between the two nations, added Al Sunaidi.
“If a company does not want to do it, then let’s make an agreement between a group of companies from Oman and a group of companies from India, so it doesn’t have to involve the formation of a company but an agreement which myself and His Excellency, the Minister of India, will acknowledge,” stated Al Sunaidi.
“We will tell our staff here and in India that anything that comes through this agreement should be fast-tracked and treated and placed on trust.”
“This will allow Oman to get fresh produce, cut costs, get the produce directly, have our own warehouses, and provide food to the many airlines that are coming in growing numbers to the new Muscat International Airport,” he added.
Catering to flights
Many of those planes were on their way to Asia, said the minister, adding that Oman could provide more catering to these flights.
Prabhu responded favourably to Al Sunaidi’s proposals.
“The world order is getting disrupted, so it’s the time to enter,” said the Indian minister. “Our strategy captures the reality of a changing world. “
“We are in the process of preparing a cargo policy for aviation,” he stated.
“We want to promote the cargo movement in India in a significant way. We don’t operate many flights at night, so the space is free. We would like to move cargo at night and create cargo hubs. That is part of the logistics study so the aviation sector and the logistics department will create cargo hubs, and one of the cargo extensions could focus on Oman as well.”
“We can use Oman as a base to cater to the wider region,” explained Prabhu.
“The Chamber of Commerce will prepare a plan so that we can work on it. The World Bank and India are preparing an integrated study of logistics within the country and logistics extension trades outside India to promote global trade. While this is being prepared for India, it can be applied to Oman.”
Aviation
“In the field of aviation, we are currently preparing a policy that would allow us to manufacture planes in India,” he added.
“We have spoken to the global management of Airbus and Boeing, and we are preparing the necessary ecosystem. But in manufacturing a plane, a few million parts are necessary. They won’t all be made in India. Some could even be made here. That may be something Oman can look into, creating a strategy of extending India’s growth to the Sultanate, because in any case, that will be the name of the game in the future: global value chains and global supply chains.”
The proposals made by both ministers were well-received by business leaders from India and Oman.
“The time has come for us to identify very specific areas of development and trade,” said Pankaj Khimji, Director of Khimji Ramdas, about the future economic relationship between both countries.
“We’ve identified areas from the grain and green policy, which is based on grain security and direct import and export of vegetables from India into Oman and onwards to the rest of the Gulf.”
“We also spoke about the policy of seeing whether we can do auto components in Oman with alumina and steel and the downstream petrochemical industry that is coming up, to have a value addition plan in Oman for Indian exports,” he added. “We identified important key areas we can work on, and overall it has been extremely positive.”