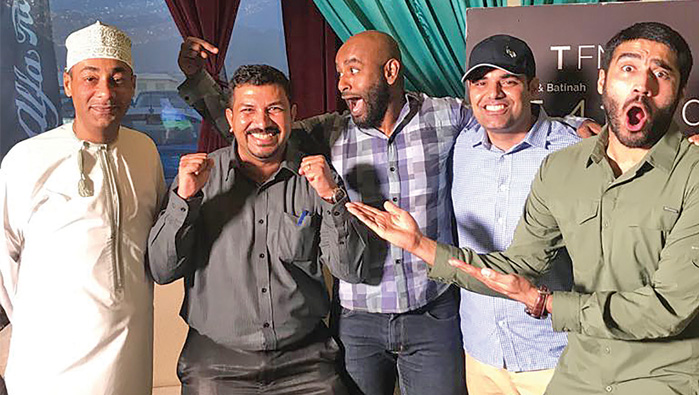 Muscat: The 2018 FIFA World Cup came to an end with France winning the final match against Croatia, in a match full of drama and a whirlwind of emotions.
The match was anything but boring. Featuring the most number of goals scored in any finals match, as well as a mid-match disruption caused by intruders, viewers were on the edge of their seats throughout the game.
As full time expired, France emerged victorious with a spectacular 4-2 win, thanks to Pogba’s outstanding performance on
the field.
On the other hand, hearts went out to the Croatian team for fighting it out right until the end.
They were the favourites right from the get go, with a majority rooting for the team to win. Surely, this World Cup was all about the underdogs.
In keeping with the spirit of the World Cup, the T FM World Cup was introduced by T FM 95.4 for ardent football fans who wished to take part and win big while the tournament was going on. The programme began with contestants taking part in an on-air quiz and fighting it out for a spot in the round of 16. Over several weeks, 8 shortlisted finalists went on to compete against each other in a bid to qualify for the finals of the T FM World Cup.
“We wanted to do something interesting for our listeners, and what better than to test their football knowledge on air and give away exciting prizes worth OMR2,000 to the winners,” said Garima Bhandari, Programme Director at T FM.
After a thrilling qualifying round, football fans Mihir Purecha and Jason Noronha moved on to the final showdown of the T FM World Cup, where they battled it out to win OMR2,000 worth of prizes, including a round trip for two to Georgia courtesy of Baraka Travels and Guide Oman, OMR1000 worth of open air tickets to India from Jet Airways, and a gift voucher worth OMR500 from Centrepoint.
A nail biting final match took place at the Bait Fairuz Tent in Ghala Golf Club, where Mihir and Jason fought hard and mighty to clinch the ultimate title of T FM World Cup champion. At the end of 2 exciting rounds of football trivia, Jason emerged as the winner and took home all the prizes.
“I am super excited and happy about winning big, all thanks to T FM,” said Jason. “I cannot wait to share this with my family.”
The T FM World Cup was held with the support of Omantel, which presented the entire campaign, and was powered by Danube Home, in association with Lulu, Abeer Hospitals, and 4Home.
“We thank all our listeners who participated, our sponsors, and the team for carrying out a great campaign,” said Bhandari.