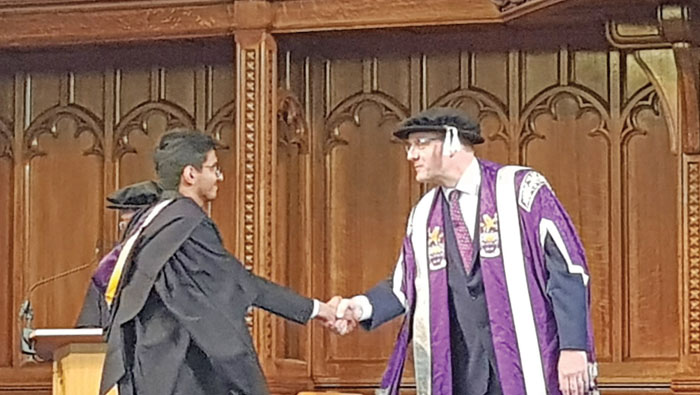 Muscat: The University of Manchester has honoured Abdullah bin Ali Al Matani as the top student in chemical engineering. The university also presented an award to Al Matani for submitting the best graduation project.
He received the two awards during the recent graduation ceremony at the University of Manchester. Also, the Omani attaché in London tweeted his congratulations to Al Matani.
“I am happy and feeling overwhelmed by this honour. This is due to the blessings of God that I accomplished these achievements, which I dedicate to my country, particularly His Majesty Sultan Qaboos bin Said on the eve of Renaissance Day,” said Al Matani. “Education is one of the top priority of His Majesty the Sultan. Higher education gets special attention from his government. These are the priorities set by the leadership of this country,” added Al Matani.
“I would also like to thank the Ministry of Higher Education for its role in providing scholarships to Omani students to study abroad. This allows Omani students to learn from a wide range of experiences in other countries,” he said.
I also thank the Sultanate’s embassy in the United Kingdom, particularly the cultural attaché, for the support it extended to us in our endeavour,” he said.