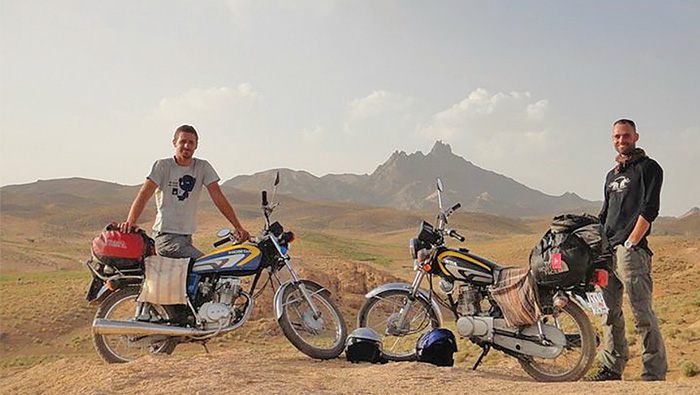 Muscat: A Danish man, who is on a quest to travel to every country in the world without flying, has arrived at country number 150 on his worldwide tour: Oman.
Torbjorn Pedersen, 39-year-old, who goes by the name of Thor – which he shares with the Norse god of thunder – embarked on his global journey on 10 October, 2013, when he left his native Denmark to travel to Germany, the first stop on his worldwide travels, and has not been home since.
Thor’s intent is to travel to all 203 nations across the world without flying, and has named his travels ‘Once Upon A Saga’. He arrived in Oman on 16 July, and in an interview with Times of Oman said his mission behind his travels was to show that humans across the world, no matter where they may come from, are all the same.
“This mission would not have been possible without the kindness and compassion of people from around the world,” said Thor. “Having travelled to so many countries around the world now, I see that no matter the culture we come from, all humans have the same aspirations.
“A mother, for example, will always have her child be her first priority. She will want to make sure that her child has clean clothes, good food and a good education, and she will do all she can to ensure that that happens,” he added. “I think this shows that, deep down, all humans share this connection.”
“There have been times when I have been invited to spend a night in someone’s home, or they have invited me to share a meal or a cup of coffee with them, and that shows you the kindness that all human beings have,” he said. “I remember, when I was on the border between Cameroon and Congo, the border guards in the Congo wouldn’t let me come in and I was definitely worried, but the Cameroonian guards were very helpful, and they let me stay in their accommodation for the night, and the next morning, they drove me back to the capital so I could resolve this issue.”
Thor’s journey has taken him on a trip of more than 190,000 kilometres. That’s half the distance between the earth and the moon.
“When I first began this journey, I was sponsored by a Norwegian oil company, but they had to close down to such a point that they were laying off staff, and even then my budget was only about US$ 20 per day,” said Thor, who is also a Red Cross ambassador for Denmark. “That ended about three and a half years into my journey, and after that I began spending my own money, but then I ran out of that and now I am borrowing money.
“Fortunately, I have had a lot of help along the way,” added the former shipping and logistics executive. “When I come to a particular country, I look at how I can go from that country to the other neighbouring countries. When I arrived in Oman, I looked at how I could go to Qatar, because the border between Saudi Arabia and Qatar is closed, and flying was not an option. That was when the global shipping company Maersk told us that they would be willing to take me from Salalah to Doha by ship, and then take me back a few days later, via India.
“A lot of the times, people tell me that something cannot be done, but I don’t think that is the case,” said Thor. “If you put your mind to it, you can achieve anything.”
Thor expects to finish his journey by 2019, after which he wants to write a book documenting his experiences and raise funds as a motivational speaker.
“Hopefully, I can reach a point where I can make a living from this full-time,” he said. “I want to be remembered as an explorer who went across the world and went down in history that way, the way people like Christopher Columbus and Magellan did.”