On the ball: France’s World Cup win is the result of Liberté, Egalite, Fraternité 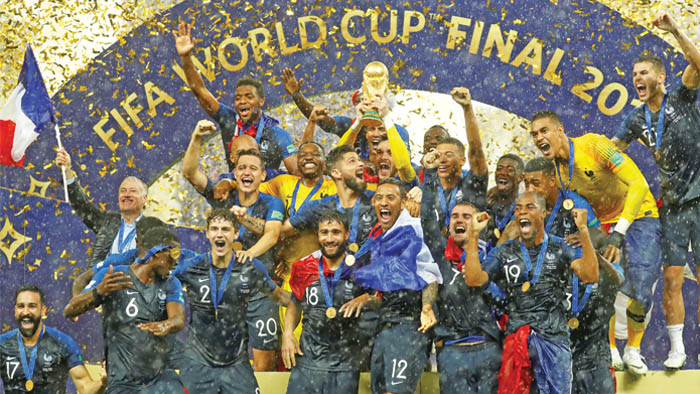 Perhaps it is best to begin this story with the opening lines from France’s most cherished national anthem, La Marseillaise. Allons enfants de la patrie, le jour de gloire est arrivé. In English, that translates into “come now, children of the motherland, the day of glory has come.” And what a day of glory has been. From now on, all France national football team jerseys will feature a second star on them. Two stars, 20 years apart, 180 minutes in the making. But there is no individual “star” to be singled out here — for France, it is a collective victory. A victory of what France stands for. A victory of liberté, égalité, fraternité.
France’s first win took place 20 years ago, in 1998, when Zinedine Zidane scored twice and Emmanuel Petit added a third to beat Brazil 3-0. Two decades later, Didier Deschamps, the captain of that World Cup winning side, achieved the ultimate win in world football, joining only Mario Zagallo of Brazil and German Franz Beckenbauer in the annals of those who have won the FIFA World Cup as both player and coach.
France’s 4-2 win against Croatia in the final of the 2018 FIFA World Cup is a victory that will live long in the memory of football fans around the world.
After several years of uncertainty and unrest within France, this World Cup win comes as a breath of fresh air for a nation that has had plenty of troubles in recent times. This win is not just about the six or seven games Les Bleus played at Russia. It’s about resurrecting a France that the footballing world knew, loved, and admired.
These troubles have followed them onto the pitch as well. This collective nature has taken some time for Les Bleus to develop, the foundations of which were laid after a France squad quickly followed Nicolas Anelka out of South Africa eight years ago. Truth be told, France had no right to be at the 2010 World Cup: Thierry Henry’s handball was the helping hand the French needed to board that plane to the Rainbow Nation.
Karma in many ways is a strange thing. The logic that follows the statement, “as you sow, so shall you reap,” was quite fitting for what the national team would face in 2010. Anelka and Raymond Domenech — France’s increasingly unpopular coach — almost came to blows during a hot-headed match against Mexico.
Anelka was summarily sent home for that offence, and in response, France’s players expressed solidarity with their departed comrade by refusing to train.
They had good reason to do so: Domenech was an oddly eccentric man who consulted fortune tellers and tarot card readers to help pick his teams, often alienating key members of France’s squads and driving divisions between players.
Key midfielder Robert Pires was omitted from the team that went all the way to the finals of the 2006 World Cup, while striker David Trezeguet — who, as France’s third-highest scorer of all time, had formed a deadly partnership with Thierry Henry — was sorely missed at the Euros in 2008, as France suffered an ignominious group stage exit.
In response to the blundering Domenech, the Fédération Française de Football chose to first employ Laurent Blanc and then Didier Deschamps, men who were key to French successes in 1998 and 2000. Deschamps has now imbibed the same collectivism in his team. That, combined with the talent this magnifique French team have, has given them their second World Cup.
And now, from Paris to Poitiers, Lille to Lyon, Nantes to Nice, Cherbourg to Chamonix, Rennes to Reunion, Sochaux to Strasbourg, all of the French union celebrates as one, because the July 15 was a glorious day.
It is only apt to once again end with a phrase that was uttered during one of France’s most testing times — that of the country’s German occupation during World War II.
Reveillez-vous, assez de honte, redevenez la grande France. Ladies and gentlemen, La Grande France have just won the World Cup, and in doing so, have firmly banished their shame of the past. — [email protected]