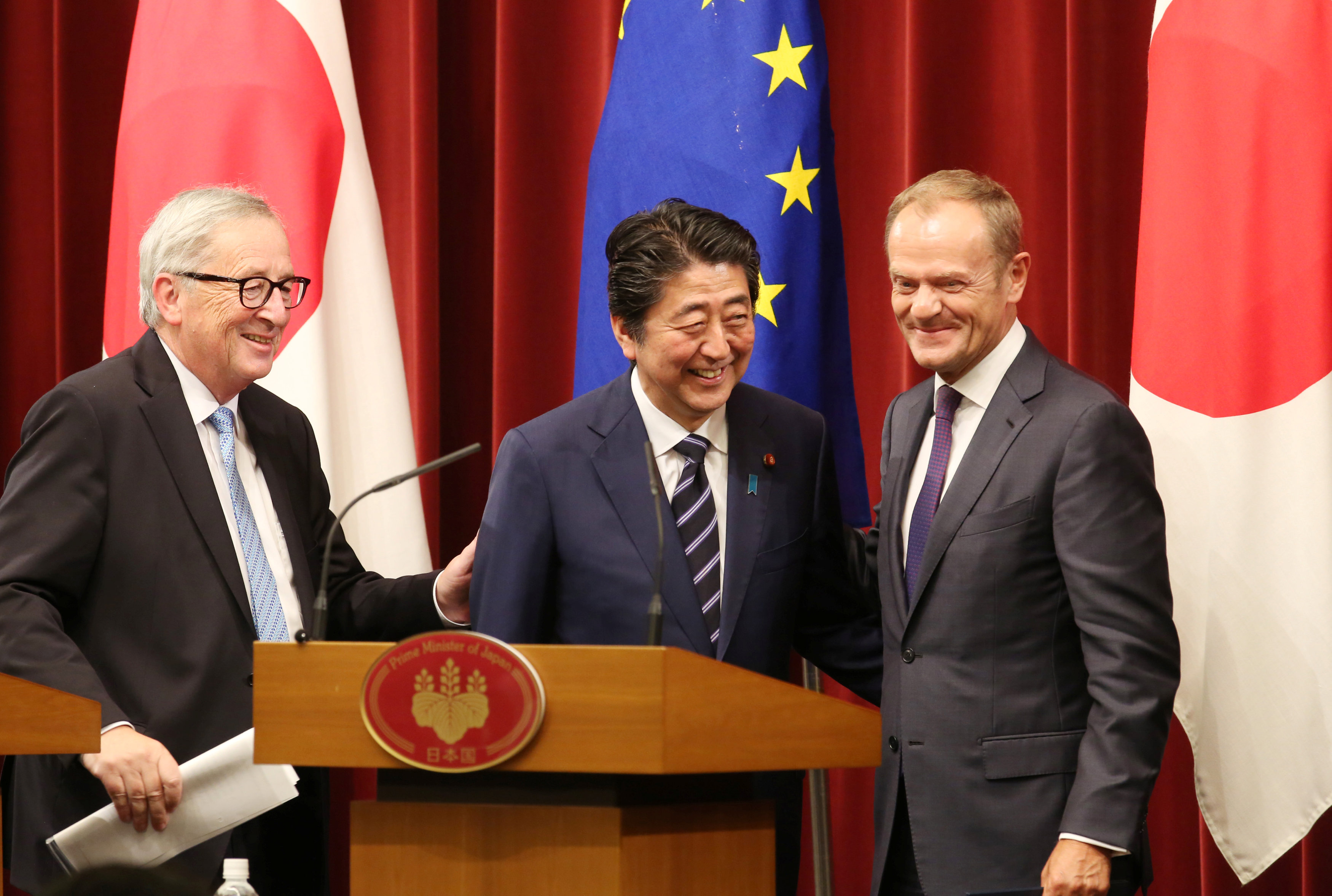 Tokyo: Japan and the European Union signed a wide-ranging free trade deal on Tuesday that both sides hope will act as a counterweight to the protectionist forces unleashed by US President Donald Trump.
The ambitious trade pact, which creates the world's largest open economic area, comes amid fears that a trade war between the United States and China will diminish the role of free trade in the global economic order.
"There are rising concerns about protectionism, but I want Japan and the EU to lead the world by bearing the flag of free trade," Prime Minister Shinzo Abe said at a news conference after the signing ceremony.
The United States this month imposed 25 per cent tariffs on $34 billion of Chinese goods to lower the US trade deficit, and China quickly retaliated with an increase in tariffs on US goods.
The Japan-EU trade deal is also a sign of shifting global ties as Trump distances the United States from long-time allies like the EU, NATO and Canada.
"We are sending a clear message that we stand against protectionism. The EU and Japan remain open for cooperation," European Council President Donald Tusk, who speaks for the 28 EU national leaders, told reporters.
The deal removes EU tariffs of 10 per cent on Japanese cars and 3 per cent on most car parts. It would also scrap Japanese duties of some 30 per cent or more on EU cheese and 15 per cent on wines, and secure access to large public tenders in Japan.
Europe's food sector is one of the biggest winners from the deal, which should allow it to capitalise on Japanese demand for high-quality cheese, chocolates, meats and pasta.
Japanese car and car parts makers are also expected to increase their sales to Europe, where they have lagged behind European rivals.
However, Japan's dairy industry is expected to lose market share to European products once tariffs of up to 40 per cent on some cheese imports start coming down.
Both Japan and the EU, having seen Trump pull back from free trade relationships, are keen to show they remain committed to removing barriers they say hamper growth, analysts said.
"Trade liberalisation and market openness continue to march ahead in Asia-Pacific," said Ajay Sharma, the regional head of global trade and receivables finance at banking and financial services provider HSBC.
EU accords with Singapore and with Vietnam were at the ratification stage, while deals with Indonesia, Australia and New Zealand were being negotiated, he added.
A China-EU summit ended on Monday with a communique affirming the commitment of both sides to the multilateral trading system.
Trump pulled the United States out of the Trans-Pacific Partnership with Japan and 10 other states on his first day in office in January 2017 and has pushed to renegotiate a free trade pact with Canada and Mexico.
Trump says he is taking a hard line on trade to protect US workers and US companies, but critics say his approach is upending the rules of multilateral global trade.
Japan and the EU account for about a third of global GDP and their trade relationship has room to grow, according to EU officials, who expect the deal to boost the EU economy by 0.8 per cent and Japan's by 0.3 per cent over the long term.