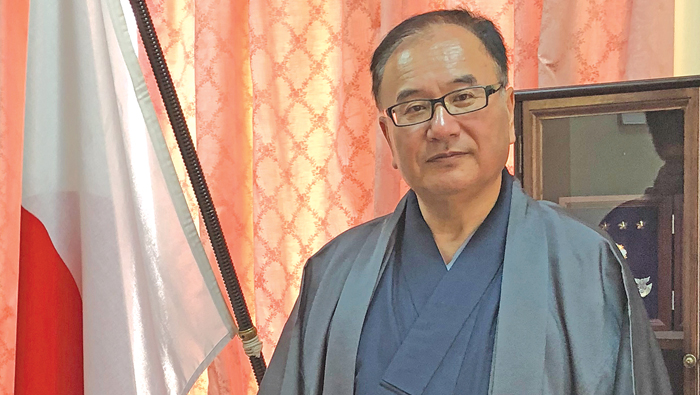 Muscat: A total of 54 Omani students have received the Japanese Government MEXT (Ministry of Education, Culture, Sports, Science, and Technology) Scholarship since 1994, according to Japan’s ambassador to the Sultanate.
“In the field of education, Japan has been inviting Omani students through several schemes,” Ambassador Mitsugu Saito told the Times of Oman. “The first scheme is the MEXT Scholarship.”
“MEXT provides scholarships inclusive of living expenses, and 54 students have already passed their examinations through this programme,” he added.
“This year, two Omanis are going to study in Japan starting September.” Cooperative efforts between the two nations in the field of education offer Omani youth a gateway to some of the most prestigious universities in Asia.
Those efforts also extend to the private sector.
“Mitsubishi Corporation has also been providing a scholarship programme since 2009,” said Saito. “This one accepts four students, from both the graduate and postgraduate levels.”
A recent agreement has seen trading giant Sumitomo Corporation join the long list of Japanese companies working to boost the skill set of Oman’s next generation of professionals.
“Sumitomo Corporation just signed an MoU with the Ministry of Higher Education to grant scholarships to three students every year,” said the ambassador.
The growth of Japanese pop culture in Oman has also made the East Asian country an attractive destination for the Sultanate’s youth, many of whom have a deep interest in learning more about the language and traditions of the so-called Land of the Rising Sun.
“There is a lot of demand for Japanese language education among the youth of Oman,” explained Saito.
“This is due to the spread of Japanese pop culture, which has attracted the Omani youth. The Embassy participates in the Muscat International Book Fair almost every year. This year, I invited a major Japanese bookseller, and they brought over 2,000 Japanese books and totally sold out during the fair, reflecting the interest the Omani youth have in Japanese culture.”
Another way by which Japan is helping nurture that demand is through “The Ship for World Youth Leaders” programme, a unique cross-culture initiative that aims to inspire the leaders of tomorrow through strong, international connections with their peers from around the world.
Omanis have been invited 10 times, the ambassador confirmed.
“The programme is divided in two: the first part focuses on inviting Omanis and other nationalities to a local town in Japan for 10 days, which connects them to Japanese culture and with one another,” he said.
“Afterwards, they board a ship and go on visits around the world for about 50 days. There are 100 Japanese and 120 foreign participants, of which there were 12 Omanis this year. This is another good occasion to deepen people-to-people contacts.”
This year’s eligible nations were Australia, India, Mexico, Mozambique, Oman, Peru, Poland, South Africa, Spain, Sri Lanka, and Japan.
While Oman’s rising income has led to it no longer being eligible for Technical Assistance Programmes as per the Organisation for Economic Co-operation and Development’s (OECD) Development Assistance Committee rules, Japan is continuing to look at ways to work with the Sultanate to build the potential of its future work force.
“We are now negotiating with the Omani government on Cost Share Technical Assistance,” he added.
“The Omani side will cover some costs and the Japanese will cover some costs as well. If this is approved, the Japan International Cooperation Agency (JICA) can continue its projects in Oman.”
JICA has worked tirelessly to promote a peaceful and prosperous world where people can hope for a better future and explore their diverse potentials. As of 2017, the organisation implemented 549 technical cooperation projects, dispatched more than 10,000 experts, installed 1,230 MW in power generation facilities, and provided over 59 million people with access to clean drinking water.
Japan remains one of the world’s largest contributors to Official Development Assistance (ODA), having reigned as the top ODA contributor from 1991 to 2000.