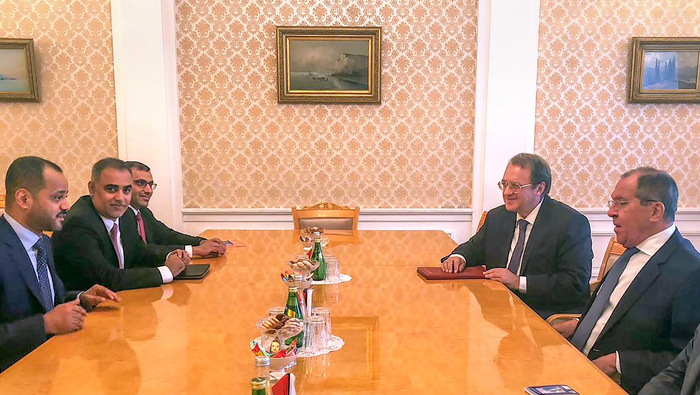 Moscow: Sergei Lavrov, Foreign Minister of the Russian Federation received in his office on Tuesday Sayyid Badr bin Hamad Al Busaidi, Secretary General of the Foreign Ministry, who is currently visiting Moscow to hold a round of the regular political consultations between the two friendly countries.
The meeting dealt with a number of matters related to enhancing the bilateral cooperation between the two countries in various areas to serve the joint interests.
It also touched on several issues and the regional and international developments of common concern. The meeting stressed the importance of dialogue in achieving understanding and stability, as well as availing peaceful solutions for the tensions and conflicts.
The meeting was attended from the Omani side by Yousef bin Issa Al Zadjali, Sultanate’s Ambassador to the Russian Federation and members of the delegation accompanying Sayyid Al Busaidi.
It was attended from the Russian side by Deputy Foreign Minister and Special Presidential Representative for the Middle East and Africa Mikhail Bogdanov and a number of Russian Foreign Ministry officials.