Your next extraordinary adventure at Western Australia's Ningaloo Reef 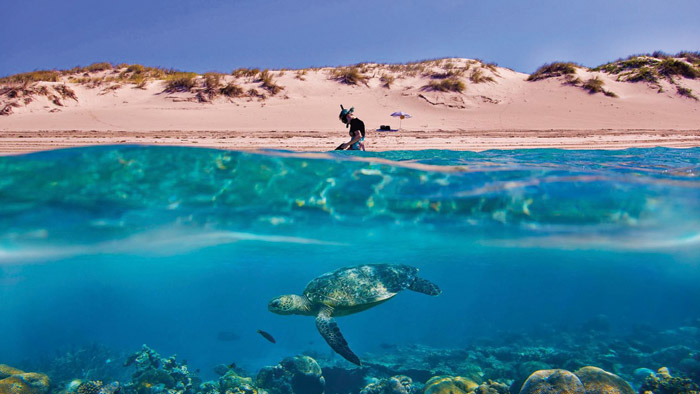 Have you ever heard of Australia's other reef? A place where the red and orange hues of Australia's iconic outback meet white sand beaches and turquoise blue water, where you can walk off the shore and instantly experience pristine coral reef during a special drift snorkel, and where the best marine encounters in the world are part of everyday life. Western Australia's Ningaloo Reef, located along the stunning Coral Coast, is truly one of the region's best-kept secrets and one of those stunning spots you must experience for yourself.
Once you reach Perth jump on a two-hour flight from Perth or an extraordinary 750-mile road trip, pull on your snorkel gear and step into the bluest waters of the Indian Ocean. From here, you only need to swim a couple of metres before you're floating over the Unesco World Heritage-listed coral gardens of one of the largest wildlife-rich reefs on the planet. What sets the Ningaloo Reef apart is the fact that there's nowhere else on Earth where you can access a large and beautiful coral reef as easily as this.
The abundance and variety of marine life indicates the health of the reef and at Oyster Stacks or Turquoise Bay — a few of the locals' favourite spots — you can catch a ride on the gentle current to view some of the 200+ varieties of coral and more than 500 species of fish that call Ningaloo Reef home. On any given day you may come across schools of tropical fish, green turtles, dolphins and sting rays. Scuba divers can also visit the Exmouth Navy Pier, best described as an "aquarium without glass" and considered one of the best shore dives in the world. It's an underwater photographer's dream renowned for its quantity and array of quality marine life.

Swim with the biggest fish in the sea
Beyond the coral reefs, Ningaloo is one of the only places in the world where whale sharks appear annually, and from March through August charter companies take visitors to the back of the reef where they literally swim side-by-side with these majestic gentle giants. The region has the most consistent congregation of whale sharks, which makes for incredible swims. With no more than ten people in the open water at one time, these intimate and awe-inspiring tours are conducted in an eco-minded, sustainable manner to minimise disturbance as much as possible. During the day at sea, you may also spot manta rays, turtles, and dugongs feasting on the world's largest seagrass meadows.
Not only can visitors dive with whale sharks, but between August and October they can swim with humpback whales, too. Previously endangered, humpback whale numbers have steadily recovered and now an estimated 30,000 migrate along the coast each year making Western Australia as the largest population in the world.

Adventures above water
Along the shores and on land there's plenty to do, taste and experience to make your escape exciting and unforgettable. A gentle one-hour cruise on the still waters of Yardie Creek in Cape Range National Park is the best way to see the striking colours and the many wild inhabitants of this ancient red limestone gorge, including rare black-footed wallabies, euros, red kangaroos and birds. Active travellers can also hike through the Cape Range National Park, taking in the rocky gorges carved by ancient flowing rivers. For a truly secluded experience, spend a night or two glamping under the stars in luxury safari tents at Sal Salis Ningaloo Reef where the outback meets the sea. Here, days are filled with guided gorge walks, fishing, kayaking, relaxing and snorkelling. The chef serves inspired gourmet meals, from seafood caught that day off the reef to local fare. It's the only place to stay in the region where you can dive right into the reef simply from the shore. Alternatively, travellers can enjoy air-conditioned resort-style accommodations at Mantarays Ningaloo Beach Resort, offering comfortable suites with local artistry, a fantastic restaurant and refreshing swimming pool overlooking the stunning turquoise waters of the Indian Ocean.

Plan your ultimate adventure
To make the most of your trip, don't forget to stop at the other Unesco World Heritage-listed area - Shark Bay - less than a day's drive from Ningaloo. Shark Bay is another marine hotspot, best known for the wild dolphins of Monkey Mia, where they swim right up to the shore and play by your feet. Visitors can also take a walk and wonder at Shell Beach, one of only two beaches on Earth made of billions of tiny shells from just one species.
Western Australia's Coral Coast is one of the rare places on the planet where you can easily access such an incredible diversity of marine life in its natural environment, so close to the shore.