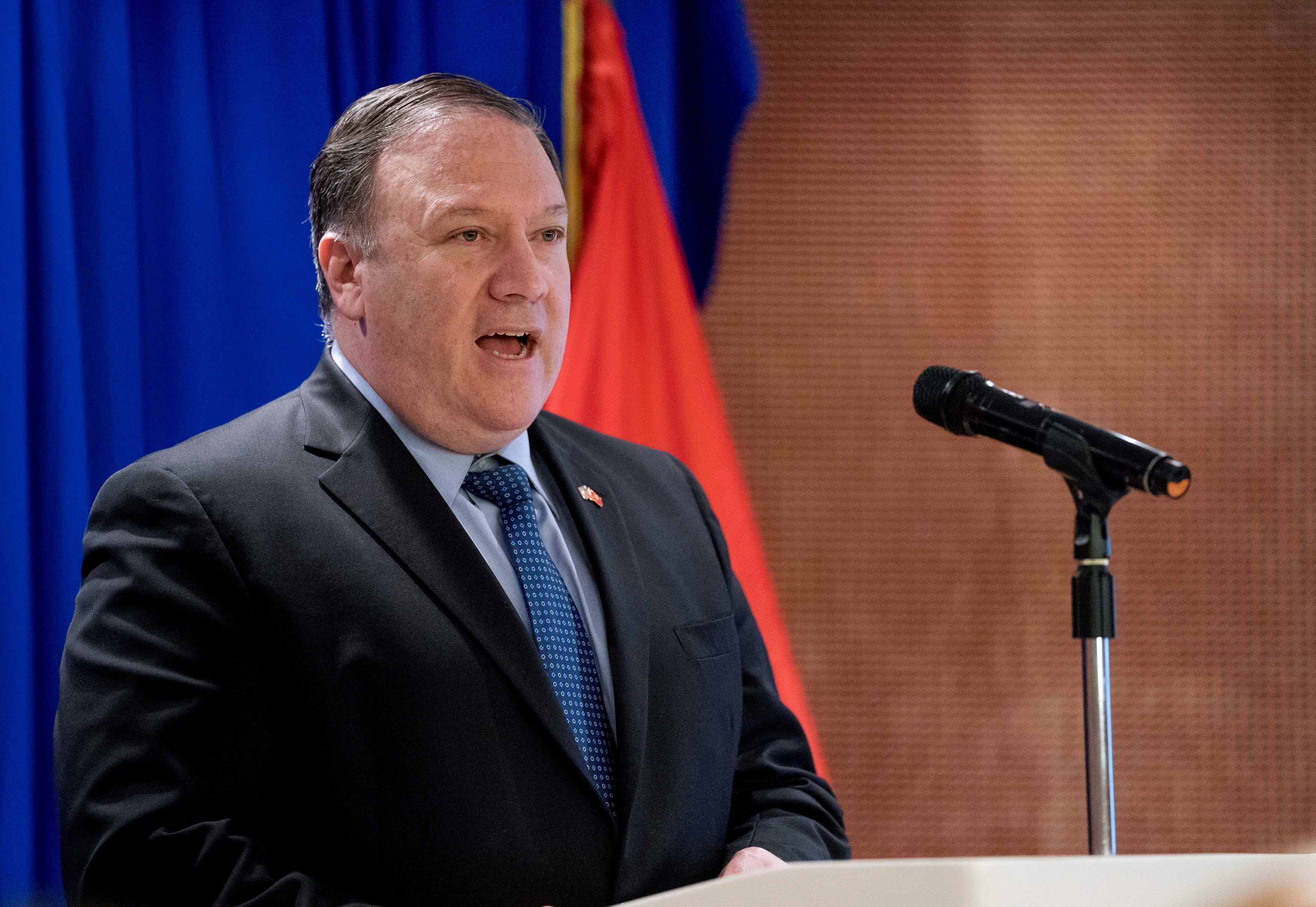 Tokyo: US Secretary of State Mike Pompeo brushed off North Korean charges that he used "gangster-like" diplomacy in negotiations in Pyongyang, saying on Sunday after meeting his Japanese and South Korean counterparts that he would continue to pursue denuclearisation talks with North Korea.
Pompeo said in Tokyo there was still a lot of work to do, but he was confident North Korean leader Kim Jong Un would stick to a commitment to abandon nuclear weapons he made during a summit with US President Donald Trump in Singapore last month.
Pompeo's meeting with Japan's Minister of Foreign Affairs Taro Kono and South Korean Foreign Minister Kang Kyung-wha followed Pompeo's two days of talks in Pyongyang that ended on Saturday.
"When we spoke to them about denuclearisation, they did not push back," Pompeo told a news conference.
"The road ahead will be difficult and challenging and we know that critics will try to minimise the work that we've achieved." Pompeo spoke after North Korea said the talks "brought us in a dangerous situation where we may be shaken in our unshakable will for denuclearisation, rather than consolidating trust."
The statement was carried by the official KCNA news agency on Saturday soon after Pompeo left Pyongyang, raising questions about the future of the talks in which he is trying to persuade Pyongyang to give up a nuclear weapons programme that threatens the United States.
Kim made a broad commitment in Singapore to "work toward denuclearisation" but did not give details on how or when he would dismantle North Korea's nuclear programme.
Trump in turn offered security guarantees to Pyongyang and pledged a halt to large-scale military drills with South Korea.
North Korea's latest comments, which came after Pompeo said talks had made progress, were a reminder of the difficulties that previous US administrations have had negotiating with the reclusive state.
Leaked US intelligence findings have concluded that North Korea does not intend to give up its nuclear programme completely.
Pompeo said he did not meet Kim on his latest visit to Pyongyang, as he had done twice before, and he had not anticipated doing so.
The White House said before the trip that he would meet Kim.
In a speech later on Sunday in Vietnam, Pompeo urged North Korea to follow the example of Vietnam, saying he believed Pyongyang could replicate Hanoi's path to normal relations with Washington and to prosperity.
"The United States has been clear on what we seek from North Korea...," Pompeo said in Hanoi.
"The choice now lies with North Korea and its people.
"If they are able to do this, they will be remembered, and Chairman Kim will be remembered, as a hero of the Korean people."
Some analysts have expressed alarm that the talks appear to have run into difficulties, although others see a possible North Korean negotiating ploy.
Richard Haass, president of the Council on Foreign Relations, said on Twitter there was a danger military action could be called for because Trump might now claim he had tried diplomacy but was betrayed by Kim.
"But a rushed summit and demands that NK denuclearise in short order or else is not a serious test of diplomacy," Haass tweeted.
Japan's Kono thanked Pompeo and said the three allies had reaffirmed a commitment to keeping sanctions on North Korea until it abandoned nuclear weapons and ballistic missiles of all ranges.
"We confirmed that security assurances will be provided to North Korea as agreed in the summit. At the same time we have reaffirmed that the international community will continue to fully implement relevant UN Security Council resolutions," Kono said.
Japanese Prime Minister Shinzo Abe earlier at his residence in Tokyo praised Pompeo.
"I would like to pay my tribute to the strong leadership you have demonstrated in negotiating with North Korea," Abe told Pompeo.
"This really shows the unwavering bond of the Japan-US alliance."
South Korea's Kang said her country did not believe the United States had softened its demands on Pyongyang, as some US officials and analysts have suggested.
"Secretary Pompeo's visit to Pyongyang this time has taken the first steps," she said.
"We expect this to be followed up by further constructive and productive negotiations."
Pompeo said on Twitter after he met Kono he was in Tokyo to discuss the US alliance with Japan and maintaining "maximum pressure" on North Korea, an expression Trump's administration had backed away from after the Singapore summit.
He said before leaving for Pyongyang he was seeking to "fill in" details on North Korea's commitments and maintain the momentum towards implementing the Singapore agreement between Trump and Kim.
US intelligence officials earlier told Reuters Pompeo wanted to agree on at least an initial list of nuclear sites and an inventory that could be checked against available intelligence.
Pompeo said in Tokyo he had pushed North Korea on a promise to destroy a missile engine test site.
Pompeo said talks had yielded an agreement to form a "working level" group to oversee day-to-day interactions between the United States and North Korea.
Officials from the two sides would meet next week in Panmunjom, on the border between the two Koreas, to discuss the return of the remains of roughly 7,000 U.S. soldiers missing since the 1950-53 Korean War.
KCNA said Pyongyang had offered to discuss declaring a formal end to the 1950-53 Korean War to mark next month's anniversary of the armistice agreement.
It said the US side had shown little interest, giving "certain conditions and excuses".
Pompeo also told Abe he had raised the issue of Japanese people abducted by North Korean agents in the 1960s and 1970s to train its spies. In addition to demanding that North Korea agree to the complete, verifiable and irreversible abandonment of its nuclear weapons and missile programmes, Abe has made the return of any abductees still in North Korea or a full disclosure of their fates a condition for providing any major economic assistance.