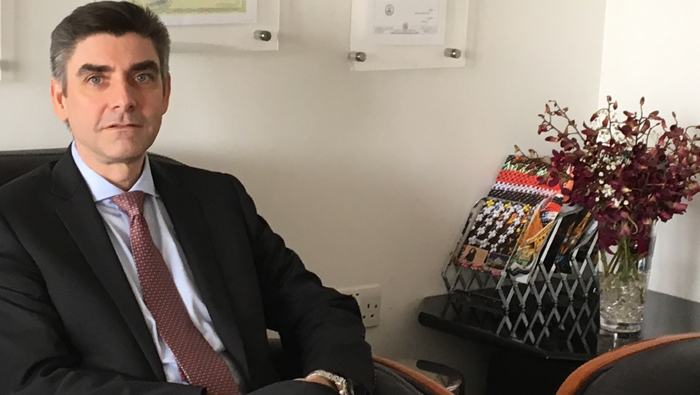 Muscat: Oman Air, the national carrier of the Sultanate, is planning to establish a joint venture to create a new ground handling company to improve its competitive edge in the international market, its executive vice president said.
Oman Air has an experience spanning three decades in handling ground services from an average of 23,000 flights and over 3.5 million passengers per year but the company is facing a growing challenge in the air transportation business. To offset the challenges, Oman Air is now forming a separate ground handling company to go into a joint venture with an international firm.
“Part of Oman Air’s strategy is to focus as an airline as its core business. It means separating some of its businesses to operate independently. This is the reason why we are separating ground handling from the airline to improve efficiency,” Andrew Walsh, executive vice president of ground handling and cargo’s transition office, told ‘Times of Oman’ in an exclusive interview.
“At the moment, ground handling is running as a business unit with its own profit-loss account. The ground handling unit does not treat Oman Air differently. It is just another customer and it gets the same attention as other airlines,” Andrew added.
Walsh said that after a series of negotiations with global interested companies, the negotiating team has shortlisted two companies from a list of five.
“We are in the process of a series of evaluation and documentation with two companies. They are global companies with presence in many countries. The final decision which of the two will be selected to partner us will be based on the shareholding split and how they want to get involved in the joint venture,” Walsh explained.
He said that Oman Air is willing to concede up to 49 per cent shareholding to the international partner to form the ground handling company. However, he could not speculate the total investments of the new company and the breakdown of the equity. But he added the main objective of separating ground handling from the airline is to ward off the expected competition.
“Competition is coming as we have seen in November last year when there was an invitation to companies to apply for the license of the operation of ground handling in Muscat. We will be the second company in the country to do ground handling. This is the reason why we need an international partner to raise our level of competitiveness,” Walsh said.
The joint venture will not only make the new ground handling company much more competitive but bring in new technologies, expertise and the training of the staff.
“It will improve the company’s economies of scale and give us access to the international market which at the moment we don’t have access. For example, the joint venture can take part to the acquisition of other companies elsewhere in the world to expand our operations. It will also give our Omani staff an opportunity to work in airports outside Oman,” he said.
The joint venture would also expand Oman’s efforts to expand its scope to attract much needed foreign investments and the creation of employment.
“The new ground handling company will bring in revenues and new business opportunities. We will be able to have access of investments from outside the country that at the moment is out of our reach. It will also create jobs. At the moment, 77 per cent of Oman Air’s staff are Omanis,” Walsh said.
Last week, Oman Air has gone into a joint venture to handle its cargo operations with a Singaporean-based company, SATS. The new company will be known as Oman SATS Cargo and will start operation in the summer this year. When the new terminal building is completed, Muscat Airport will have the capacity to handle 200,000 tonnes of cargo.