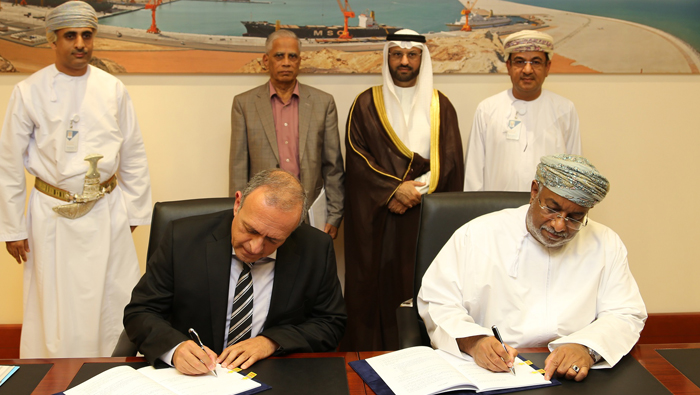 Muscat: Oman’s Special Economic Zone Authority at Duqm (Sezad) has signed a OMR77.1 million agreement with Kuwait-based Gulf United Construction to build roads, infrastructure facilities and buildings at Port of Duqm.
The package includes construction of roads, infrastructure and buildings at the commercial pre-gate, gates and inspection zone, trucks registration building, and other buildings specialised for the commercial zone at Duqm port. The construction work will be completed within three years, said a release from the port.
Yahyabin Said bin Abdullah Al Jabri, chairman of Sezad, signed the agreement on carrying out the third package of Duqm port development package (P3) at his office in Knowledge Oasis Muscat (KOM). The agreement was signed by Khalid Salah Farahat, general manager of Gulf United Construction, which started operation more than four decades ago in Kuwait.
The works of Duqm Port's third package include building 8km road with various cross sections, the building of all internal access roads to the buildings and car parks, paving the car parking places, designing, supplying and fixing traffic signal, and building two airstrips for helicopters.
The third package of Duqm port includes the infrastructure works related to construction of potable water network, firefighting network, wastewater network, water drainage channels, electrical and communication works, lighting the streets and yards, fencing works, and erecting sub-gates.
As for as buildings are concerned, the third package of Duqm port includes construction of three buildings at the commercial pier area (before the gate, at the gate, and at the inspection and customs area) including exit and access compartments from the gate, a one-stop-shop, pass permits office, and mosque. It will include also specialised buildings for the customs authority, the Ministry of Health, the Ministry of Agriculture and Fisheries, electrical services facilities, and firefighting water tanks.
"The agreement on carrying out the third package of Duqm port asserts the government's commitment to complete the Duqm port project, and the implementation of many infrastructure projects that have been previously approved in the Special Economic Zone Authority at Duqm," said Al Jabri.
"Duqm port is one of the most important drivers for the Sezad. It is a multifunctional strategic port that aims to support the economic diversification efforts exerted by the Omani government. The port is distinguished by its strategic geographic location close to the international shipping lines, as well as the African and Asian markets,” Al Jabri
“It can also attract various companies due to the quality infrastructure projects it entertains, and the advantages provided by the Sezad investors at the zone. These advantages contribute into attracting many international lines to the port, as well as developing many commercial and industrial projects. It also promotes the role played by the Sultanate in the logistics sector," Al Jabri added.
He explained that the total lengths of Duqm Port breakwaters reach about 8.7 kilometres, while the depth of the harbour's basin reaches 18 metres. He pointed out that the length of the access channel to the port is 19 metres, and this enables that the port to receive huge container ships. The port has enough space for future expansions, and this enables it to host more than one oil refinery, apart from several heavy industry and petrochemical projects.
Duqm authority has signed an agreement in February for carrying out the fourth package of Duqm port related to the infrastructure of the governmental pier, the first integrated pier to be carried out at the Omani ports for serving the governmental entities.
It is expected that the authority will award the second package of Duqm port project related to the infrastructure of the commercial pier soon. This package is the biggest package related to the port due to the diversity of works and its types on the commercial pier. The package includes paving the commercial pier for a length of 2.2km, and with a width reaching 350 metres. It also includes providing several other facilities that enable the port to handle the container vessels and the works associated with them.