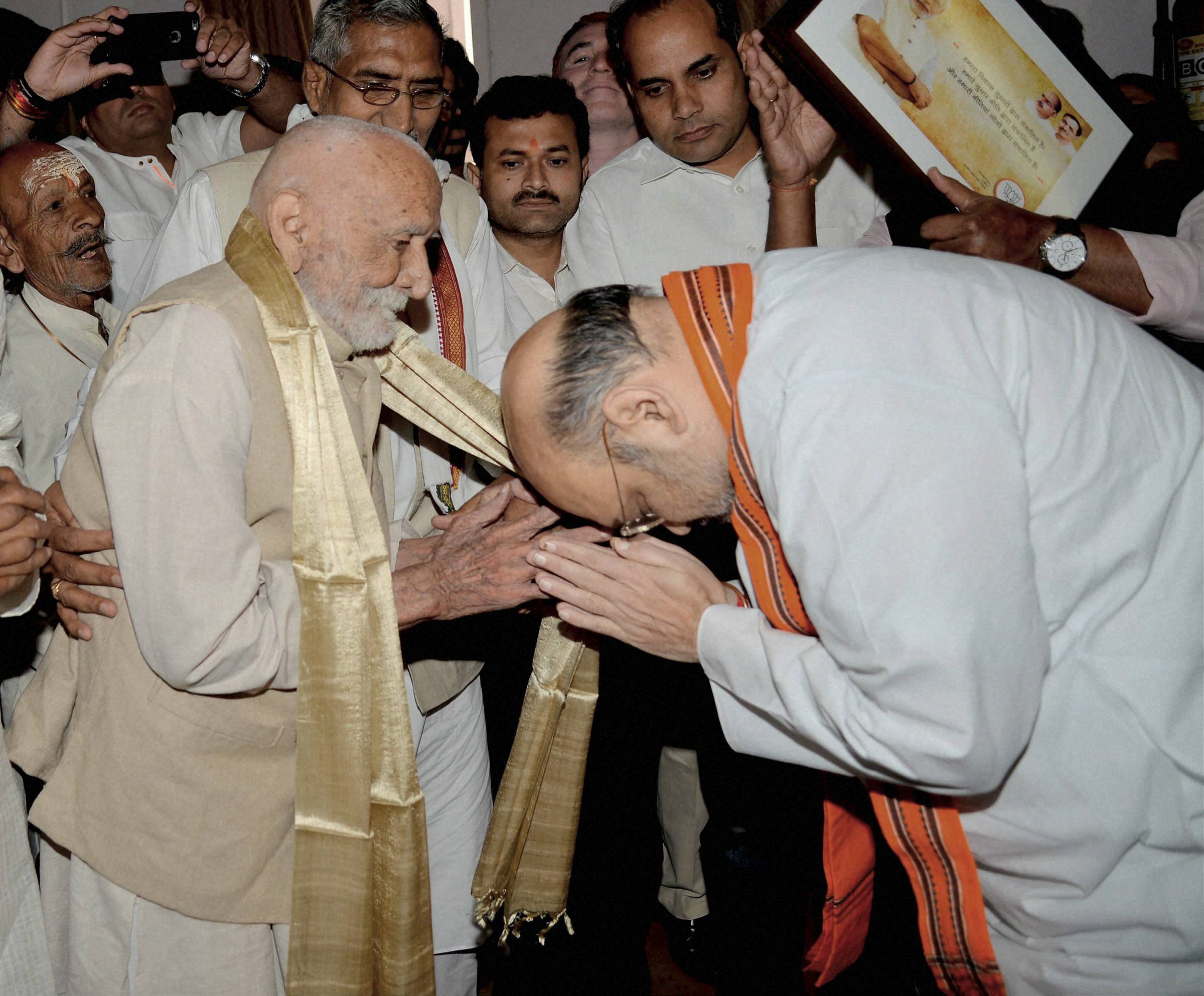 New Delhi: Asking party workers to protect and carry forward BJP's "nationalist" identity, its chief Amit Shah on Wednesday cautioned them against complacency and said they should ensure that it emerges victorious "from panchayats to Parliament" in next 25 years.
Addressing party workers on completion of 36 years of party's formation, the Bharatiya Janata Party president said, "BJP's identity is that of a nationalist party and it is the responsibility of our generation to take this identity forward. It is our responsibility to protect this nationalist identity." "What BJP is today is due to the sacrifices of three generations of party workers who worked to protect the ideology and 'Bharat Mata' and BJP workers should remember this and not let the sacrifices be frittered away," he said.
"We should not lose out on our unique identity. For us, power is not a purpose, but a means," said Shah, who started and ended his slogan with the slogan "Bharat Mata ki Jai". He said for BJP, power is a means to empower the poor and downtrodden and asked party workers to help light a lamp in the life of every poor by helping them benefit from the social security initiatives and schemes started by Modi government.
"We do not do politics of cunningness, but of character," he said, asking partymen to strive in being a bridge between the people and the government. Shah said the party is fortunate to have leadership of Narendra Modi, whom he described as "the most popular leader in the world".
"I consider our workers today as very fortunate that they are working for a party at the time when it is at height of success. But friends, it is our responsibility not to make or consider it as a pinnacle, but to take the party to greater heights. If we consider this success as a pinnacle and think the party has reached great heights, there will be complacency," Shah said.
He asked partymen to strive for building an unmatched organisation "before which all others in the world should look small".
"Today I appeal to workers to make BJP such a strong party that in the next 25 years it should emerge victorious in all polls from panchayats to Parliament. I urge partymen from Kashmir to Kanyakumari, from Assam to Gujarat that it is your responsibility to erect such a party structure before which all other structures in the world should look small," he said.
The BJP chief said the party has stood by its principles, has a different identity and is in politics with the purpose of making 'Bharat Mata' into a 'vishwa guru' (global leader).
Shah's message comes in the midst of a raging debate on nationalism, also made a major poll plank by the party in the ongoing Assembly elections in five states.
"BJP is in politics for a different purpose...Our leadership in the past decided to leave power but not our principles," Shah said.
The Bharatiya Jana Sangh and the BJP were founded to provide an alternative political ideology to the country as the policies started by first prime minister Jawaharlal Nehru were not in the interest of the country and were influenced by western thoughts, he said.
He also referred to the times when Jan Sangh merged with Janata Party for "saving democracy" in the country after Emergency and how its leadership quit power for their ideology and principles and did not think twice to give away power and form BJP this day in 1980.
Shah expressed satisfaction with the party's growth to "11 crore members" and asked party workers to ensure that these people turn into active members in the party to ensure that "BJP's graph rises the same way as it is rising now".
He also asked them to take initiatives of the government to the common man, especially poor, and utilise this power to help improve their lives. "When the party is in power, a sense of lethargy sets in. But it is the duty of the organiser to take the government's policies to the people and bring the problems of people to the government.
"Our government has enumerated schemes for the downtrodden to reach out to the poorest of the poor and take the country forward. BJP workers should try and light a lamp in the lives of the poorest by ensuring they benefit from such schemes and take their problems to the government," he asked workers.
He also urged party workers to help in the government schemes, especially the 'Namami Gange', 'Beti Bachao, Beti Padhao' and 'Toilet in every household' schemes. He noted that the BJP-led central government is moving forward while keeping the principle of 'Ekatm Manav vad' (Integral Humanism) as its central point and believed in 'Sabka saath, Sabka vikas'.
"Narendra Modi is the world's most popular leader. There is no doubt about that. For the first time there is a government at the Centre that is making policies and taking decisions for the welfare of the poor and deprived," he said Shah also asked partymen to strengthen booth-level units and keep them alive and activated "as the strength of the party lies in the polling booth".